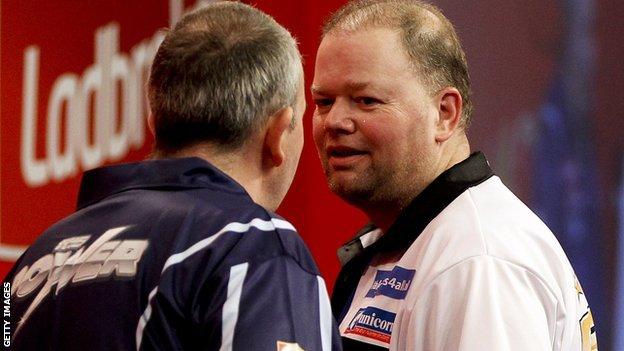 Phil Taylor says he has apologised to Raymond van Barneveld after the altercation at the end of their PDC World Championship semi-final.

Taylor appeared agitated with his opponent following the 6-4 win.

"Raymond's a big lad and has a strong handshake. When he pulled me, it hurt me," said the 16-time world champion.

"I've contacted Raymond to apologise and hopefully we can put it behind us now. I reacted wrongly and I'm ashamed of that because I really like Raymond."

He added: "I'm gutted about what happened. It's upset a lot of people and it's also upset me.

"I'm very close to Raymond. He's a great competitor and it was something that happened in the heat of the moment."

"Michael is extraordinary," Taylor, 52, said. "I've never seen a darts player like him.

"Even when I'm at my best, he's probably better than I am."

Van Gerwen, 23, has won his last two matches against Taylor, but will not be underestimating the challenge posed by his number-one ranked opponent.

"I like playing him and he likes playing me so it should be a hard game," Van Gerwen said. "It's one for everyone to watch - it's going to be a cracking match.

"He'll be ready to play me. He wants his title back, I want my first title. We are both going to work very hard and it's going to be a cracking game. For me it's a dream come true."