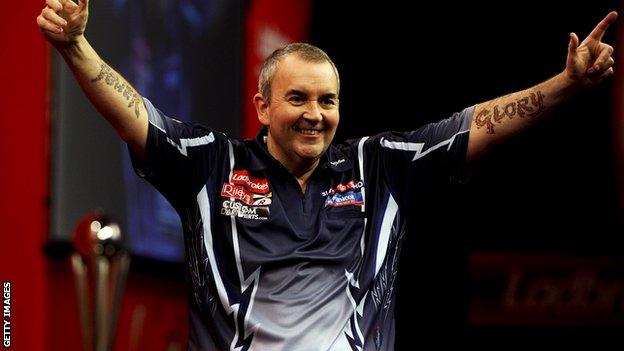 Sixteen-time world champion Phil Taylor says he would be "chuffed to bits" if darts became an Olympic sport.

Woodward said on Twitter: "Darts is definitely an Olympic sport. Look at the fans, TV coverage, audience and real skill under pressure."

"You'd have a good atmosphere, it'd be exciting to watch," Taylor said.

Taylor, 53, came from behind to beat Dutchman Van Gerwen 7-4 at Alexandra Palace and claim a 16th world title.

Darts is not one of the seven sports bidding to be admitted to the Olympic Games in 2020, but Taylor admits he would be delighted if it happened in the future.

"If we got in there [the Olympics] I'd be chuffed to bits," he told BBC Sport. "I don't think it'll be in my lifetime but you never know.

"I think the problem is, if you put darts in there, then another sport has got to drop out and I don't think that's fair. They've been there and we're taking their place, I suppose."