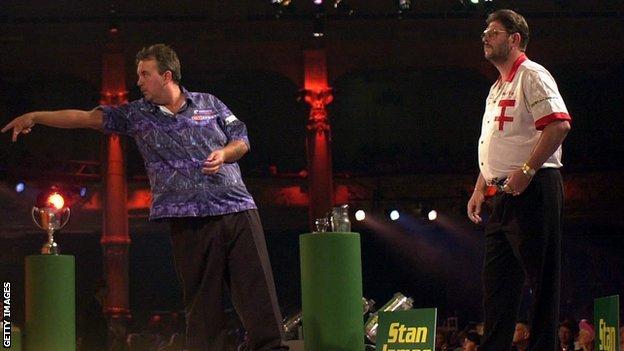 Phil Taylor will barely have had a chance to put his latest Professional Darts Corporation title on the mantelpiece by the time the British Darts Organisation version of the world championship begins on Saturday.

In terms of darting division, this year's competition at the Lakeside represents a significant landmark: 2013 marks 20 years since the last time any one man was able to call himself the undisputed champion of the world.

The acrimony that existed between the BDO and 14 of its top players came to a head in the 1993 tournament. In the aftermath, that group - worried by what they saw to be a decline in the game - broke away to form their own governing body, now known as the PDC.

At the time, the civil war appeared to threaten the very existence of the professional game. Two decades on, both organisations are keen to stress they are thriving, independent of one another.

"There were rumours going around when the split happened that it would be the end for us," BDO executive director of PR and communications Robert Holmes told BBC Sport. "The same was said when Embassy had to stop sponsoring the World Championship because of tighter restrictions on tobacco advertising.

"But we haven't been affected by any of that. We are still here to allow people to fulfil their dreams."

That the BDO was able to survive was down largely to its strong presence in the grassroots of the game. Its county system provides competition for amateurs, a path to the top and a production line of talent.

In the early days, the PDC was not afforded such a luxury and began life a world apart from the sold-out arenas, regular televised tournaments and sponsorship deals that see it thrive as a multi-million pound business today.

"[When] we first played at the Circus Tavern, I was going all over Essex giving tickets away just to get the crowd in," said PDC director Rod Harrington. "How much we've done to get the game where it is today is an incredible story."

Tensions between the two organisations have cooled in the past 20 years, so much so that players from the BDO take part in the PDC's Grand Slam of Darts tournament, held in Wolverhampton each November.

But flashpoints still occur. As recently as 2010, the PDC attempted to buy out the BDO - an offer that was rejected.

"I don't think we would ever try that again," added Harrington, who was one of the original 14 defectors from the BDO. "We don't need to. We would never let anyone else have a say in the business because it's running so well."

However, Harrington does acknowledge that he is "open-minded" about the notion of working with the BDO on what he describes as an "undercard" level.

He explained the PDC has plans for a "worldwide TV tour", based in part on how the professional golf circuit operates.

"That would perhaps only sustain about 64 players a year, so then we would need an undercard, a challenger tour," he said.

"If that means we have to work with the BDO, then we may do that. There's no question we would work with them if it was beneficial to the game."

Harrington's comments are a tribute to the BDO's production line of talent. While the BDO may lament the sight of players defecting to the PDC, Holmes is happy to celebrate the fact that every one of the 22 world champions from either code began his professional career with the BDO.

Yet Holmes rejects the notion of any future collaboration with the PDC. The reason? The BDO - celebrating its 40th anniversary in 2013 - has expansion plans of its own.

"In 2014 we're starting ranking events for all different regions throughout the world and the winners of those events will come to the Lakeside," he said.

"We're increasing the traditional 32-man field to 40 and doubling the women's draw to 16.

"I suppose both we and the PDC are striving for the best talent. I don't want to praise or criticise them."

Neither Harrington nor Holmes speak of any regrets over the split, although time has clearly not healed all wounds.

"They've proved that they couldn't run the business," said Harrington, with Holmes countering: "The PDC is there for a set number of professionals, there is no room for the growth of the sport."

But, clearly, 20 years on from civil war, darts is in rude health. Players have more options, more tournaments to play in, and a better chance of earning a living from the sport.

Fans have more darts to watch on television. Are those gearing up for the carnival at the Lakeside likely to have turned their nose up at Taylor's gripping final victory over Michael van Gerwen? Probably not.

Of course, it would be more satisfying for one organisation to rule the sport, providing one undisputed world champ, but, in co-existing for two decades, the BDO and the PDC have found their respective niche.

As Taylor puts it: "Darts is bigger now than it ever has been.

"I don't knock the BDO. The system they have is fantastic. Without them, we wouldn't be where we are.

"I wish them all the best. In sport, you always find that the people who play are OK. It's the ones that don't play that cause all the problems."