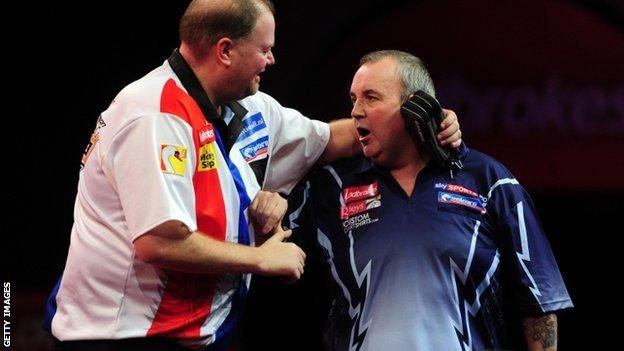 Phil Taylor's clash with Raymond van Barneveld in the PDC World Championship semi-finals has been referred for possible disciplinary action.

Taylor, 52, who went on to win a 16th world title, reacted angrily as his 45-year-old opponent tried to shake his hand following the 6-4 win.

Sunday's incident will be examined by the Darts Regulation Authority.

If it decides a player has brought the game into disrepute, a financial penalty is most likely.

A spokesman for the PDC (Professional Darts Corporation) told BBC Sport: "As with any incident like this, it has been referred to the Darts Regulation Authority.

"They will decide if there's been any breach of the rules and whether there should be a punishment."

The English player apologised to the Dutchman the day after their on-stage altercation at Alexandra Palace in London.

Two: Taylor came second in the 2010 BBC Sports Personality of the Year awards.

Nine: The number of televised nine-dart finishes he has recorded.

16: The number of world championships won.

52: Taylor's age on winning his 16th world title, the oldest ever PDC winner.

74: The total number of BDO and PDC major events won.

"Raymond's a big lad and has a strong handshake. When he pulled me, it hurt me," he said.

"I reacted wrongly and I'm ashamed of that because I really like Raymond. I've contacted Raymond to apologise and hopefully we can put it behind us now.

"I'm gutted about what happened. It's upset a lot of people and it's also upset me.

"I'm very close to Raymond. He's a great competitor and it was something that happened in the heat of the moment."

Van Barneveld used his Twitter account to deny saying he wanted Taylor to lose in the final.

"What a joke. I never said nothing. I am a professional - Phil and me are okay, what a world," he tweeted.

Taylor won his 16th title on New Year's Day when he came from 4-2 down to beat Michael van Gerwen 7-4.

Sanctions ranging from a formal warning to a suspension can be imposed on players who breach the rules.

In 2008, Adrian Lewis and Kevin Painter were disqualified from the Holland Masters after a row which later saw them suspended and fined.

The PDC's rival competition, staged by the British Darts Organisation (BDO), starts at the Lakeside, Frimley Green, on Saturday.