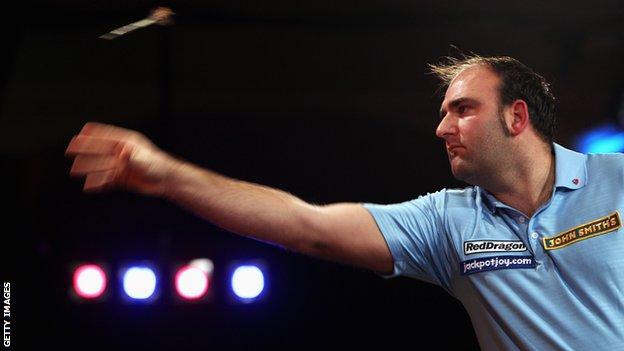 Waites, 35, threw a 180 maximum in an opening 13-dart leg as he saw off Van de Wiel 3-0 to record only the second whitewash in the first round.

Sixth seed Ross Montgomery is out as Paul Jennings recovered from illness to pick up a 3-1 win.

"Scott Waites is the sort of guy who should have won this competition by now, but never has.

"He is a great darts player, plays really well in tournaments but as soon as he gets to the Lakeside, he doesn't perform.

"Scott is the favourite though as far as I am concerned."

And De Vos edged out Englishman Tony Eccles 3-2 on the Lakeside stage.

Jennings had been unwell overnight but hit a 103 checkout and an 11-dart leg on his way to taking the first set.

Montgomery, ranked BDO world number five, levelled at 1-1 before Jennings came back to take the next two sets.

Eccles took the first set in his match against 14th seed De Vos before his opponent took the next two.

Eccles levelled, but De Vos produced an 87 checkout, finishing on the bull, for a narrow victory.

The second round begins on Tuesday, with number one seed Stephen Bunting taking on two-time semi-finalist Darryl Fitton in the pick of the games.