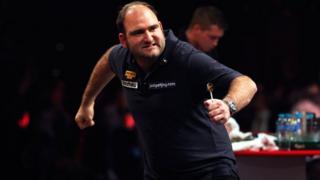 Waites, the third seed, took advantage of a string of missed doubles from George to win the first 12 legs of the match on the way to a 5-0 lead.

George, who was making his Lakeside debut, had to wait until the fifth set before he won a leg, and briefly halted Waites by winning the sixth set.