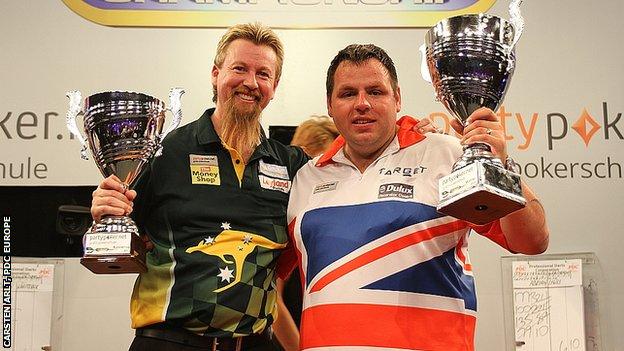 Lewis, who won back-to-back world titles in 2011 and 2012, and was twice a European Championship runner-up, continued: "I know that I've got more gears too.

I've been working hard, got my rhythm back and the results are coming for me now

"I'm getting there and it's great to be winning again. I've been working hard, got my rhythm back and the results are coming for me now.

"I went into the final full of confidence after beating Michael. I knew I was playing well and I did a job on Simon. I've lost a couple of times in the final to Phil Taylor, so to win this is a massive achievement."

Hampshire-based Whitlock, who went into the event as the added: "That was Adrian at his best and it's great to see him back playing so well.

"I've played really well throughout this tournament and I'm thrilled to bits to have reached the final. It's not bad being the runner-up and I had a great go at defending my title, but Adrian was the better player and he was just too good in the final."

World number one and reigning world champion Taylor was surprisingly beaten in the last 16 by Belgium's Ronny Huybrechts.