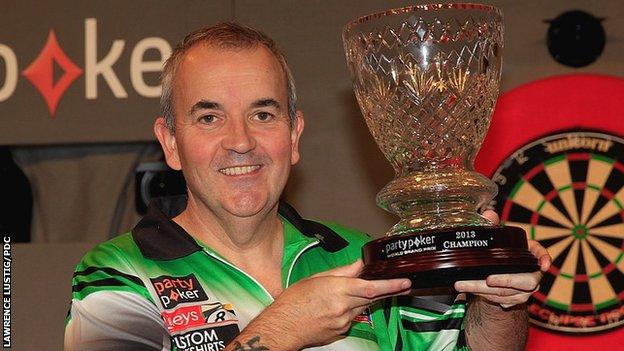 World number one Taylor won the first 15 legs against St Helens-born Chisnall to take a 5-0 lead in sets.

Despite a brief response from Chisnall in the sixth set, Taylor cruised to an easy victory.

"It's a great night for me but I feel for Dave," said the 53-year-old from Stoke-on-Trent.

"It was his first major PDC final but it won't be his last major final.

"After I went 5-0 up my concentration started to go and I felt a bit sorry for Dave, which is not me."

Chisnall, a BDO world finalist at Lakeside in 2010, beat defending Grand Prix champion Michael van Gerwen on his way to the final but was disappointed to fall short against Taylor, the reigning world champion.

"It's the best night and the worst night of my career," said the 33-year-old. "I wasn't nervous but the darts just weren't going in and I was trying too hard.

"I'm proud of what I've done this week. It's been a hard week because every player I've played has been really good, but tonight there was nothing there."