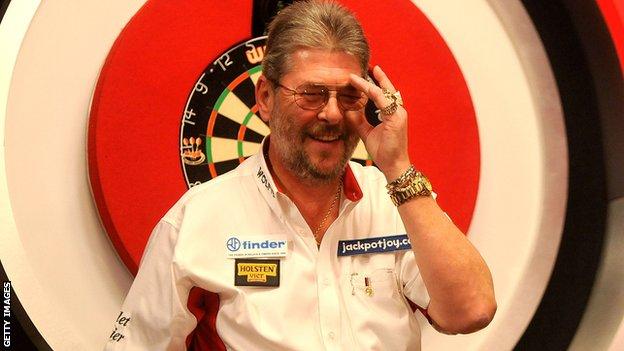 Martin Adams was pleased to put a nightmare 2013 behind him and make a winning return to Lakeside at the BDO World Championships.

The 57-year-old lost in the first round last year and a number of personal issues, including going through a divorce, severely affected his form.

"It was a fantastic feeling [to be back]," Adams told BBC Sport.

"The support I had from the crowd was fantastic and I love them to death. I think we have the best crowds in darts anywhere in the world here at Lakeside."

But he did confess to some early nerves, despite this being his 21st consecutive appearance at Frimley Green.

"There were [nerves] today," he admitted. "If you'd asked me the same question three years ago, I'd have said 'I'm used to it now'.

"But things happen in life that focus your attention differently. I was definitely nervous when I went out there."

Adams, who is based near Peterborough, will now face three-time runner-up Tony O'Shea in the first round.

Experienced O'Shea has lost in the final in each of the last two years and Adams does not believe there could be a more popular champion if the Stockport thrower was to win the event on 12 January.

"I'm amazed Tony's not won it yet," said Adams. "I think he deserves a win at some stage because he's such a lovely bloke and such a great darts player.

"I wish him well in this tournament, but I just hope he isn't playing too well on Tuesday," he joked.

"But it will be electric out there. The crowd will love the game."