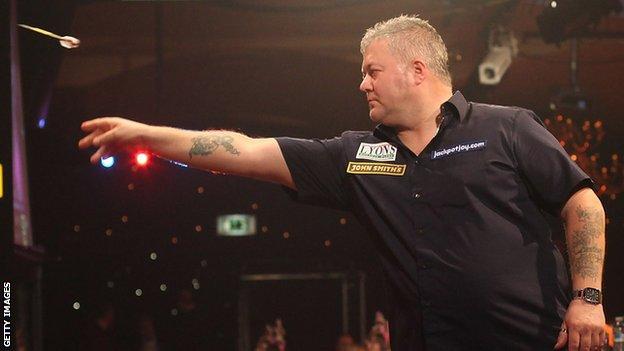 Fifth seed Darryl Fitton lost 3-1 to Tony Eccles in the first round of the BDO World Darts Championships.

The 51-year-old from Stockport missed several chances to win the first set and Eccles stepped in, landing double four to take an early advantage.

Fitton, twice a semi-finalist at Frimley Green, levelled but more missed doubles in the latter stages were costly as the unseeded Eccles won.

I'm getting a bit sick of getting beaten. I'm disappointed now, but I'll be all right

The Hartlepool man faces Wesley Harms of the Netherlands in round two.

"We were expecting a ding-dong and it didn't happen, but I scraped over the line and that's what counts," the 43-year-old told BBC Sport.

"It's about hitting doubles at the right time. It's the first time I've had a bit of luck on the Lakeside stage. I hope it continues."

Fitton, who was making his 12th consecutive World Championship appearance, said: "I never give up and I always thought I was still going to win the game.

"It's one of those things. I keep saying the same things - that it will be better next year - but I'm getting a bit sick of getting beaten now. I'm disappointed now, but I'll be all right."

There was no such trouble for sixth seed Jan Dekker, who cruised past fellow Dutchman Benito van de Pas 3-0 at the Lakeside.

An average of just over 83 was enough for the 23-year-old, who finished the match with a 101 checkout, to progress to round two.

Also through to the last 16 are Belgium's Geert de Vos, a 3-1 winner against Latvian qualifier Madars Razma, and Scotland's Ross Montgomery, who saw off Michael Meaney from the Republic of Ireland in a deciding set.

Meanwhile, Basingstoke's Paul Hogan and Hartlepool's Dave Prins won their preliminary-round ties against Karel Sedlacek of the Czech Republic and Jeroen Geerdink of the Netherlands respectively.

In the first round of the ladies' competition, Julie Gore of Wales beat Norway's Rachna David 2-0 - the fourth seed's first victory in seven Lakeside appearances.

Before the afternoon session began, there was a minute's applause in memory of former World Championship runner-up Phill Nixon, who died in August at the age of 57 after a battle with cancer.

Nixon famously came back from six sets down in the 2007 final against Martin Adams to level the match at 6-6, before Adams went on to claim the first of his three titles.