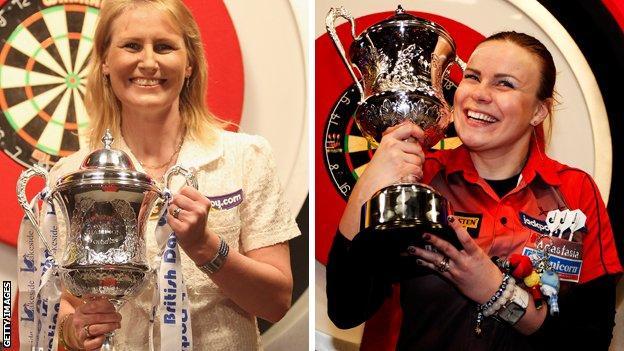 Look out, Lakeside. Here come the girls, and there are more of them than ever before.

The ladies' field has doubled in 2014, meaning 16 women are competing at the BDO World Championships.

"It's a brilliant move," nine-time winner Trina Gulliver told BBC Sport. "There are so many good players on the circuit at the moment."

She should know. She is already out, beaten 2-0 by Dutch debutant Tamara Schuur in the first round.

"I just didn't perform," she admitted. "Tamara's a good player and she played well. It's a hard field and any player could win it. This just wasn't my year."

Representatives from seven nations - England, Wales, Germany, Netherlands, Norway, Denmark and Russia - have converged on Frimley Green this week, all trying to take home the world crown and a winner's cheque for £12,000.

It has been a long journey to get to this point.

In January 2001, Gulliver became the first ladies' world champion. Months earlier, ladies' darts had been at a crossroads.

The Professional Darts Corporation, the more lucrative of the two governing bodies, offered several female players the chance to qualify for their version of the World Championship and challenge 31 male competitors.

Some took up the offer, including Canada's Gayl King, who made history by becoming the first woman to play in a male World Championship, featuring in the 2001 PDC tournament in Purfleet.

Gulliver was one of those to reject the PDC's advances, although only after the British Darts Organisation - keen to prevent their star players crossing the divide - put forward a proposal to set up their own tournament for female players, which would run at the same time as the male event at Lakeside.

The Ladies' World Championship was born.

"I saw the bigger picture," said the 44-year-old, who was born in Warwickshire and is now based in Somerset.

"It wasn't all about me. I looked at the bigger picture of ladies' darts.

"Perhaps I should be more selfish, I don't know, but I'm about ladies' darts. That's why the ladies' tournament came about.

"I went to the BDO and said 'the PDC have offered me this and how is it going to affect me if I take it?' They said they would get back to me, and then the next thing, we had a Ladies' World Championship."

The number of competitors grew from four to eight in 2002, although no player could stop Gulliver until she lost to Anastasia Dobromyslova in the 2008 final.

Dobromyslova would make more headlines before the year was out, accepting an invitation to take part in the 2009 PDC World Championship, where she lost in the preliminary round.

She joined the PDC circuit on a full-time basis and there were rare moments of success for Dobromyslova - she became only the second female player to beat a male counterpart in a major televised competition when she defeated Vincent van der Voort at the 2009 Grand Slam of Darts - but more struggles followed and, in 2011, she returned to the female ranks of the BDO.

The Russian is back at Lakeside in 2014 as the defending world champion, and after scraping through her first-round encounter with Karin Krappen, she told BBC Sport that winning a fourth world title will be a tougher proposition than she has been used to in previous years.

"We have to do something we haven't done before," said the 29-year-old, who is based in Cheshire.

"Before, I would already be in the semi-final [after one win]. Now I'm just in the quarter-finals. It's extra work and extra pressure, and you never know how people will cope."

So has the new, expanded format worked so far?

Well, sceptics would point to the statistics from the first round and say no.

Of the 10 players that appeared in the first three days of competition, only one - Schuur - registered a three-dart average of more than 70. Five of the eight players managed that average or better in their first matches of the 2013 event.

In addition, there was only one maximum score of 180 and four checkouts of 100 or above in the first five ties of the ladies' competition.

But supporters of the expansion would put forward the performances of Schuur and teenager Fallon Sherrock, and ask whether they would have even qualified for previous World Championships, let alone made it through their first-round matches.

Sixth seed Sherrock, in particular, impressed in her first outing, showing a degree of composure that belied her 19 years as she battled past Rilana Erades to reach the last eight.

Not bad for someone who only took up darts around three years ago.

"It sounds really bad but I never actually wanted to play," said Sherrock, who swaps her darts for scissors and straighteners when she steps away from the oche and heads back to her day job as a mobile hairdresser in Milton Keynes.

"When I was 15, I used to go with my sister to her youth games because she was really good.

"I started playing when I was about 16, and I got picked for the England youth team when I was 17 because I was doing quite well. It's all spiralled from there."

Sherrock is one of ladies' darts rising stars - and according to the top players the women's game has a bright future.

"I'm not that old myself, but it's always good because that younger generation coming through is something we can look forward to," added Dobromyslova, who will face Sherrock in the quarter-finals.

In our conversation, Gulliver admitted she "didn't agree" with how the Russian's defection to the PDC was handled.

But one thing on which they concur is that the ladies' game, and in particular the World Championship, has the capacity to grow further in time.

"Hopefully next year or the year after, it's going to be 32 players and a longer format," said Dobromyslova.

Gulliver, awarded an MBE last June for her services to the sport and her charitable work, has two main hopes for the immediate future of the tournament.

"And more prize money would be nice," she adds, with a smile.