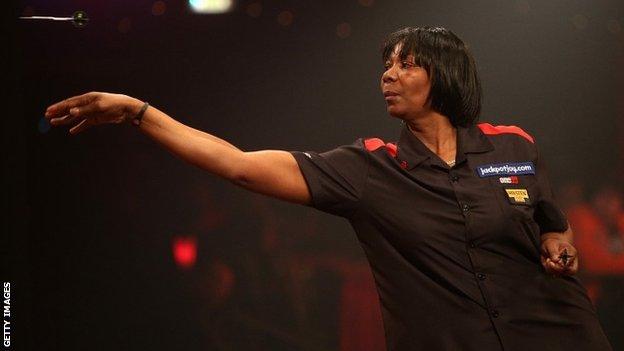 Top seed Deta Hedman has admitted that many female players have performed below their best in the first round of the 2014 Ladies' World Championship.

The 54-year-old beat Lorraine Farlam 2-0 in her opening match.

Hedman's average of 83.69 was almost 11 points higher than the figure managed by any of her fellow competitors in the showpiece event at Lakeside.

"We've played so well all year, but we haven't really produced what we can do," she told BBC Sport.

There are 16 female participants at Frimley Green for the first time in the 14-year history of the Ladies' World Championship.

Six debutants are among the expanded field and Hedman, who lives in Essex but competes for Oxfordshire at county level, believes early nerves may have contributed to some of the struggles on stage.

"When you come to Lakeside, it does something to you," continued the 2012 runner-up. "You tingle everywhere and you've got to go just go out and enjoy it.

"Without a doubt, it will improve. You have to remember that half of those girls have never been here.

"I've played many tournaments and had nerves, but when I first came to Lakeside, I had never shaken so much.

"It's good, but it's an experience. Once you do it a couple of times, you get the feel of it and you know what to expect."