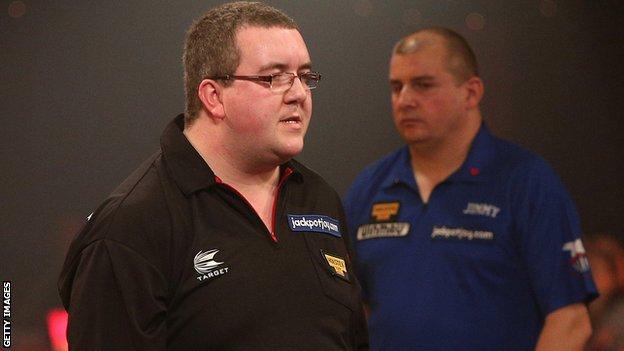 When it was pointed out to Stephen Bunting that he shared more than a slight resemblance to Peter Griffin from "Family Guy", he took it in good spirit.

A YouTube video of him dancing to Surfin' Bird - Griffin's favourite song in the animated US comedy series - became an internet sensation among darts fans.

He even used it as his walk-on music at the 2011 World Championship.

Back in the real world, becoming a family guy is one of the main reasons why Bunting has become the top man in the British Darts Organisation rankings.

The arrival of son Toby in the summer of 2012 was a watershed moment for "The Bullet", who has swept aside almost everyone in his way ever since.

"My form's being really good and I've had a lot of tournament wins over the past two years," the 28-year-old from St Helens told BBC Sport.

"Obviously family life has improved [life] for me. I've got a baby now and the family keep me in line. I'm more settled at home, so I'm coming out and being happy playing darts."

Bunting won eight BDO titles last year, including the retention of his World Masters crown without dropping a set - the first time that had happened in the tournament's 40-year history.

And that form saw Bunting enter the 2014 World Championships at Lakeside as the number one seed for the second consecutive year.

Surprisingly, his record at Frimley Green is poor for a player of his undoubted talent. Only once in his six previous visits has he made it past the second round, and on that occasion - in 2011 - he was knocked out in the last eight.

Not that Bunting, who made his World Championships debut as an 18-year-old in 2004, feels he has performed badly on the biggest stage in BDO darts.

"I have played really well here and it's just a couple of doubles that have let me down over the past few years," he said.

"This is my seventh World Championship, so I'd say I was a bit of a seasoned pro now. It's just like a local pub league or playing for your county going up on that stage, and I love every minute of it.

"I'm practising a lot more now than I have done previously, so hopefully that will pay dividends for me."

That extra practice time has come as a result of giving up his day job with a major darts company and turning professional last year.

"It's going well. You can conduct yourself that much better. There's no work, it's all pleasure really."

A trophy-laden run has followed, and when a BDO player performs well over a period of time, they can expect to be asked the familiar question about a potential switch to the Professional Darts Corporation.

"In the last three or four years, I've been tempted by the PDC," Bunting admitted.

"It's a brilliant organisation and there's a lot of prize money to be won, but my main aim is to win this title and, while I'm here, I won't think about the PDC or the BDO. I'll just think about winning this title."

St Helens is predominantly a rugby league town, but is fast becoming a darting hotbed.

Dave Chisnall, beaten by Martin Adams in the 2010 final at Frimley Green, is ranked fifth in the PDC and will make his Premier League debut next month.

And Michael Smith, the reigning PDC world youth champion, caused one of the biggest shocks in PDC World Championship history in December when he defeated the great Phil Taylor - who has just the 16 world titles to his name - at the Alexandra Palace.

Will Merseyside soon be able to boast a world darts champion?

Speaking after his opening-round win against American qualifier Jim Widmayer, Bunting said: "I feel like I'm part of the tournament now.

"Tony O'Shea and Scott Waites [the two BDO finalists in 2013] are two of the best players in the world at the moment and to see them go out [in the first round] gives you a bit of a buzz because you know that they're not there to beat you.

"Glen Durrant is playing well at the moment, so is James Wilson, and Robbie Green had a really good performance in the first round as well. But if I keep playing the way I'm playing, I'll be fine."