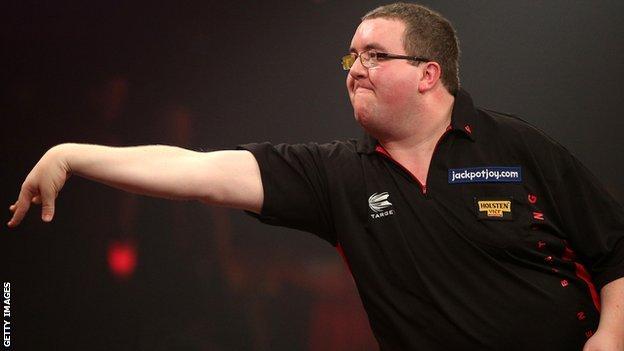 Number one seed Stephen Bunting put in an imperious display to reach the quarter-finals of the BDO World Darts Championships at the Lakeside.

It is only the second time in seven Lakeside appearances that Bunting has made it through to the last eight.

He will meet Alan Norris - conqueror of defending champion Scott Waites - who progressed with a 4-1 victory against 10th seed Glen Durrant.

Dutchman Rick Hofstra, who will meet Bunting in the next round, also went through in the evening's opening game after opponent Martin Atkins retired through injury with the Yorkshireman 2-0 down.

But Bunting was the star of the show on the fifth day at Frimley Green, producing the form that saw him win eight BDO titles in 2013 and posting the highest three-dart average of the tournament so far.

He broke the throw in the first leg of the match, and although Hartlepool left-hander Prins responded with a 12-darter, the world number one went on to claim the first set and needed just 39 darts in total to win the second.

Despite a slight dip late on, Bunting closed out the match in style with a maximum 180 and a successful shot at double top.

"I know how good my form's been," he told BBC Sport. "I wanted to get that 100 average and make myself the player to beat.

"There are a lot of good players still left in the tournament that are capable of hitting that sort of average and beating me. I've got to keep myself mentally right and hopefully I can go all the way."

Prins said: "I tried my best but Stephen never let up at all. He was amazing. That's why he's world number one."

In the day's first encounter, Green hit a magnificent 167 checkout - the highest outshot of the week so far - to take the first set with a 12-dart leg.

It was a lead that the 39-year-old did not relinquish against Northumberland's Robson, who missed an excellent chance to level at 2-2.

With 25 points left to win the fourth set, Robson hit treble nine instead of the single with his first dart to bust his score.

"That was a killer," said Green, who will face Hartlepool's Eccles in the last eight. "I've done it many times and I felt for Gary.

"It was frustrating because I didn't feel like I played as well as I can. I'm just grateful I'm through."

The 29-year-old Dutchman took a crucial fifth set and looked certain for victory, only for Eccles to land a stunning 122 checkout to send it into a decider.

And the birthday boy maintained the momentum to reach the last eight for the second time in his career.