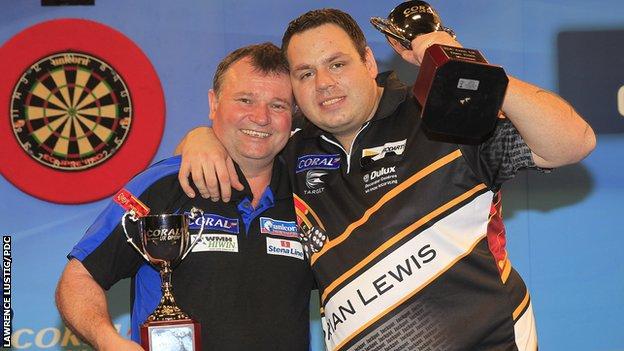 Jenkins had defeated world champion Michael van Gerwen in the last four, but proved no match for Lewis, who averaged more than 109 in the final.

The 50-year-old from Ledbury has now appeared in eight televised finals, but is yet to lift a major title in the Professional Darts Corporation.

"I've been playing well for the last few months and the small changes I've made to my darts are paying off," said Jenkins.

"I hope I can win a major title eventually. I'll always keep plugging away and hopefully it will happen for me next time."

Two-times world champion Lewis added: "It means a lot to me to win this. It's my first major of the year but I feel like I can go on to win a lot more now.

"This is the first time I've got past the quarter-finals in this tournament, so to go on and win it is a massive achievement for me."

Phil Taylor, the defending UK Open champion, suffered a shock early exit at the last-64 stage as his poor start to 2014 continued.

The 16-times world champion lost 9-7 to Nottinghamshire factory worker Aden Kirk - a player ranked outside the world's top 100 and appearing in his first televised event since progressing through the PDC's Youth Tour.

Taylor has won just one of his first five matches in the Premier League, which continues in Nottingham on Thursday.