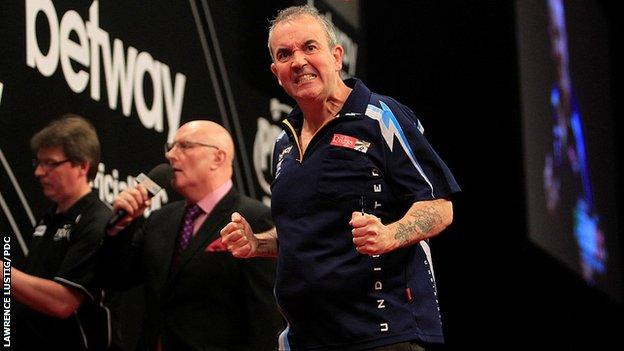 Van Gerwen topped the table with a 7-5 win over Peter Wright.

Victory over Wright, the man he defeated to win his first world title in January, confirmed defending Premier League champion Van Gerwen would finish top of the table for the second year in succession.

Suffolk-based Wright was the only other player who could have finished in the top four, but his chances of qualification had already disappeared by the time he started his final group match.

Taylor, from Stoke-on-Trent, lost four of his first five matches in the competition but remained unbeaten in his final 11 games to secure a semi-final against Van Barneveld.

Anderson, the 2011 Premier League winner, takes on the Netherlands' Van Gerwen in the other last-four tie, with the semi-finals and final all being played at the O2 Arena in London on 22 May.