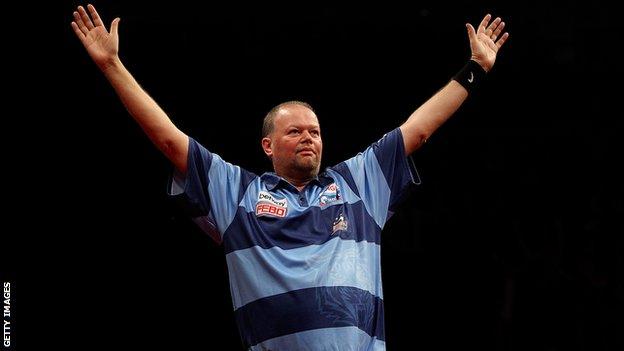 The 47-year-old won 10-6 in the final against Van Gerwen, who was hoping to retain his Premier League crown.

"Beating Phil and beating Michael, the number one and two in the world, is fantastic," he told BBC London 94.9.

Van Barneveld, who finished second in the group table after 15 weeks of competition at various venues around the United Kingdom, also claimed a first prize of £150,000.

"I still remember when I joined the PDC," the five-times world champion continued. "I got a wildcard to play in the Premier League, and after a couple of weeks I thought it was the best event in the world.

"It means the world. Winning the World Championship and winning the Premier League - these are the best two events in the PDC and I can't describe how happy I am."

He added: "It's all about faith and belief. If you never believe, you can't achieve anything."

World number one Van Gerwen, who finished top of the group table for the second year in succession and beat Gary Anderson in his semi-final, said: "I had a very good Premier League but it wasn't good enough tonight.

"Raymond was the best player and he deserved to win because he produced his best performance in the final."