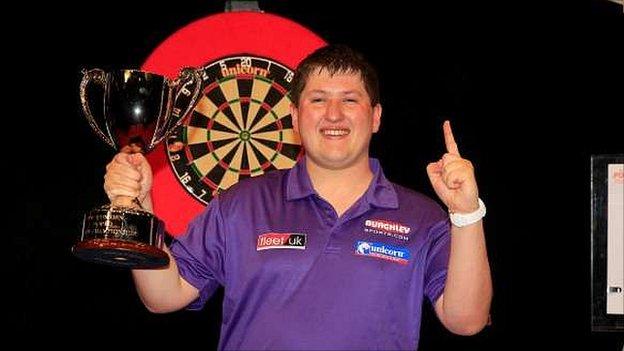 Isle of Wight's Keegan Brown has won the PDC World Youth Championship title after he claimed a 6-4 win over Austria's Rowby-John Rodriguez.

Brown took the £10,000 first prize and secured a place in the Grand Slam of Darts and PDC World Championship.

"I've had 10 years of playing darts and it all came down to one night, and then you're world champion - it's crazy."

Brown is ranked 69 in the world and has been playing county men's darts for the Isle of Wight since the age of 13, having taken up the game at nine.

His victory at the O2 Arena in London on Thursday took place in front of 10,000 spectators, who later saw Raymond van Barneveld beat Michael van Gerwen to win the Premier League darts title.

Brown has also beaten 16-time world champion Phil Taylor twice and says the big hitters in darts hold no fears for him.

He said: "The kids nowadays, especially those in my situation, are not afraid of playing Phil Taylor, Raymond van Barneveld or Michael Van Gerwen.

"We just go up there and play at such a high level that we are not scared of anyone."

Brown is mentored by Waterlooville-based Australian darts player Simon Whitlock and puts his success down to nothing more than lots of practice.

"Lots of kids think it's a good time to get into it, but they lose a couple of games and get disheartened," he said,

"They expect to be world champion overnight, but I've been practising every day for 12 years and it paid off."