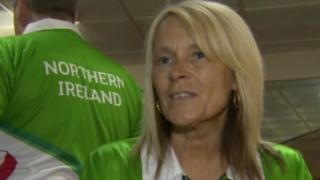 Northern Ireland's best darts players are targeting success at the Europe Cup which starts in Romania on Wednesday, 24 September.

The men's team are up against Turkey, Lithuania and Italy in their qualifying group while the NI women face opposition from Iceland and the Czech Rep.

Both hope to make it through to the knockout stages in Bucharest while some players are also involved in the singles and doubles competitions.