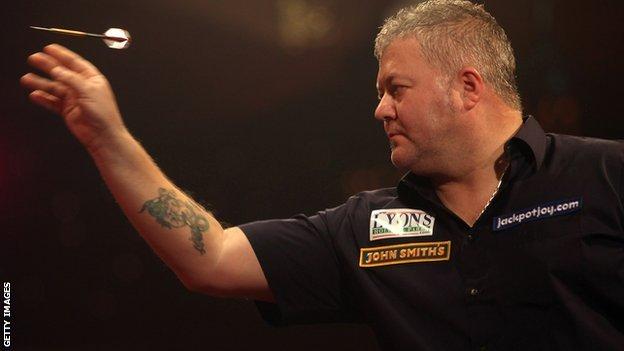 Darryl Fitton and Ross Montgomery are through to the second round of the BDO World Championships at Lakeside.

Fitton, the 15th seed from Manchester, won seven successive legs as he coasted to a 3-0 win over Paul Jennings.

Scotland captain Montgomery, the 11th seed, was tested by debutant Pip Blackwell but came through 3-1.

Brian Dawson's preliminary-round win against Seigo Asada of Japan concluded the afternoon session on day two of the nine-day event.

Fitton, making his 13th consecutive World Championships appearance, was relieved to make it into the last 16 having suffered first-round defeats in four of his previous five visits to Frimley Green.

"We don't have enough of these tournaments," the 52-year-old told BBC Sport.

"There's so much pressure on this first round. I know how Paul feels and how Tony O'Shea felt last night. It's so difficult. You play all year for one big tournament."

Fitton, who has twice reached the semi-finals, could play 2014 runner-up Alan Norris in round two.

Huddersfield's Scott Waites, the champion in 2013, begins his campaign for a second world title later on Sunday when he faces Lincolnshire youngster Sam Hewson in the final match of the evening session.