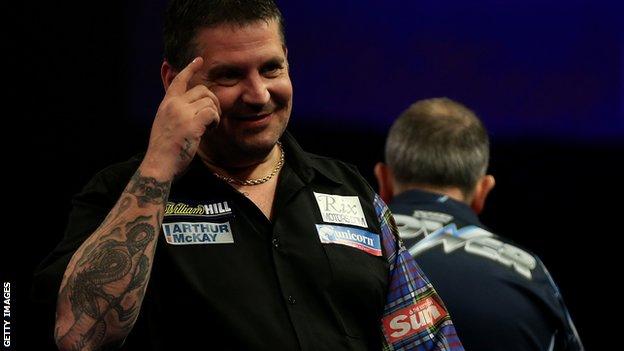 Darts legend Phil 'The Power' Taylor was downed in a dramatic world final by Gary Anderson.

But who is the man who beat the 16-time champion? Here are 10 things you may not know about the 44-year-old Scot.

1. Throwing it all away

Anderson's arrows ended up in the water after a defeat at the BDO World Championships at the Lakeside, Frimley Green, six years ago.

"I could not buy a double," he said after a 5-3 defeat by Tony 'Silverback' O'Shea. He didn't need to. Although Anderson likes the odd vodka, his favourite drink is coffee.

Initially going under the moniker 'Dreamboy' he is now known as 'The Flying Scotsman'.

The Flying Scotsman was a train that travelled at twice the speed of a darts flight - reaching 100 mph (160 kph) on the rails, compared to 40mph (64 kph) from oche to board.

No Scot had previously won the Professional Darts Corporation tournament, a breakaway event from the British Darts Organisation where Anderson and other champions like Taylor and Michael van Gerwen started.

Two of Anderson's countrymen have won the BDO version - Les 'McDanger' Wallace (1997) and Jocky Wilson (1989, 1982) who was used as a backdrop on Top Of The Pops for the Dexys Midnight Runners track "Jackie Wilson Said".

4. Home is where the dart is

Originally from Musselburgh, East Lothian, Anderson moved to Eyemouth, Berwickshire, as a young man after meeting future wife Rosemary, whom he is now separated from.

Eyemouth is a small town in the Scottish Borders area of Scotland with a population of about 3,500 people. Anderson is a former builder who still enjoys a spot of DIY.

5. From pub darts to champion of the world

While the Scot progressed from pub games to the bright lights of Alexandra Palace, he still spent time behind bars.

6. From lows to highs

In the autumn of 2011, Anderson unexpectedly lost his younger brother Stuart, who died aged 35 after a heart attack.

The following spring, his beloved father Gordon, who helped him to step up to the oche in the first place, passed away.

Anderson, who also has two teenage sons, named his new-born boy Tai Gordon Stuart Anderson, and has a 'Tai' tattoo on his hand.

"I went through a difficult time for a couple of years with things that happened in my life, but everything is now spot on and it's down to him," he said.

The trophy was presented to Anderson by AP McCoy, an ambassador for sponsors William Hill, who has 19 champion jockey titles himself.

Jump Around by House of Pain, a number three US hit in 1992, is the chosen tune for Anderson's walk-on music backed by a boisterous crowd, who are estimated to have got through 250,000 pints of beer during the tournament.

Phil Taylor comes on to 'I've Got The Power' which topped the charts 25 years ago for German outfit Snap! The single was released on 3 January 1990, 10 days before Taylor claimed his first world championship, beating 'Crafty Cockney' Eric Bristow.

9. We could be heroes

Before taking up darts in his mid-20s, Anderson was a useful pool player and lists six-time world snooker championship finalist 'Whirlwind' Jimmy White as his sporting hero.

Another man he admires is Taylor: "It's always an honour to be on the stage with that man. He's one of my biggest heroes and to get one over on him is even better."

In-form Anderson has now won his last 18 competitive darts matches and has racked up the tungsten tons, averaging well over 100 (best 104.54) in four of his six matches at Alexandra Palace.