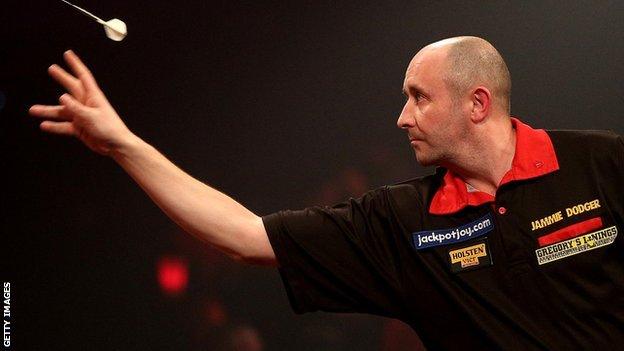 Top seed James Wilson suffered a shock 3-1 defeat by Swedish supermarket manager Peter Sajwani in round one of the BDO World Championships.

The 42-year-old from Huddersfield raced to the first set but his finishing then deserted him, allowing qualifier Sajwani to seal a famous victory.

Wilson is the first top seed to go out in the opening round since Raymond van Barneveld's early exit in 2000.

"I think I'm dreaming," said Sajwani, who came through a preliminary round.

"He's the number one seed, a brilliant dart player and the best gentleman ever.

Wilson started the first three legs of his match against 37-year-old Sajwani with a 180 and clinched the first set with an 11-darter, but a succession of missed doubles proved his undoing and Sajwani improved to cause a major upset.

Jamie Hughes, Brian Dawson and Geert De Vos are also in to round two.

All three beat opposition from the Netherlands, with Tipton's Hughes the only seeded player to progress to the last 16 of the men's draw on day three at Lakeside, as he overcame Michel van der Horst 3-1.