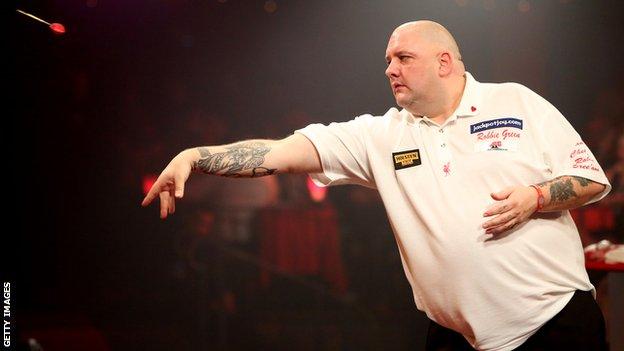 Robbie Green says he will have to improve his level of performance if he is to beat Lakeside giant-killer Peter Sajwani at the BDO World Championships.

Qualifier Sajwani eliminated top seed James Wilson in round one.

"For him to come back after what James did shows he's got grit - he's going to be a tough player," he told BBC Sport.

"Obviously I'm going to have to improve on my match against Labanauskas but that's the way you get into the tournament.

"I can play a lot better than that but I'll take it."

Wallasey-based Green has been struggling with a knee injury in recent months and is managing the problem as he looks to better his run to last year's semi-finals.

"I have to work out what practice I do," added the 16th seed.

"I did a good session the other night with [fellow BDO player] Paul Hogan and I was supposed to have another session with him on Monday, but I couldn't do it. I got up in the morning and it was really tight.

"I didn't want to overdo it, so I did 10 minutes here and 10 minutes there, just to try to loosen it up a bit.

"It's been fine today. I wouldn't put the performance on my knee, it just wasn't spectacular."