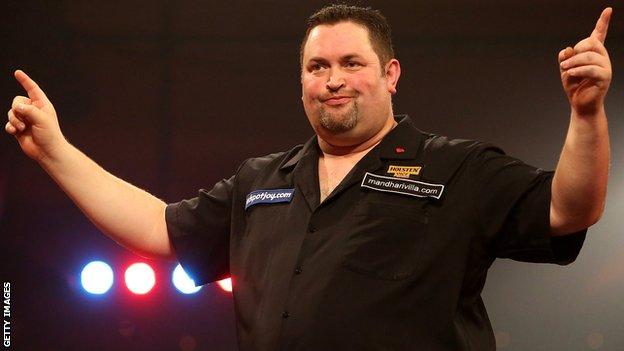 After 2014 runner-up Norris held his nerve in a deciding set to avoid an early exit of his own.

"Daniel is a quality player," said the 42-year-old from Yeovil, who plays Darryl Fitton next.

"He'll be devastated because he had me on the ropes."

Wallasey's Robbie Green eventually closed out a 3-1 victory after a strong start against Lithuania's Darius Labanauskas, who impressed on his Lakeside debut.

"He was like a little bull terrier that wouldn't get off my leg," said 16th seed Green, who will play Peter Sajwani - Wilson's conqueror - in round two on Wednesday.

Meanwhile, nine-time champion Trina Gulliver is through to the last eight of the women's event.

Gulliver did not drop a leg in her victory over Anneke Kuijten of the Netherlands and will face defending champion Lisa Ashton on Thursday for a place in the semi-finals.