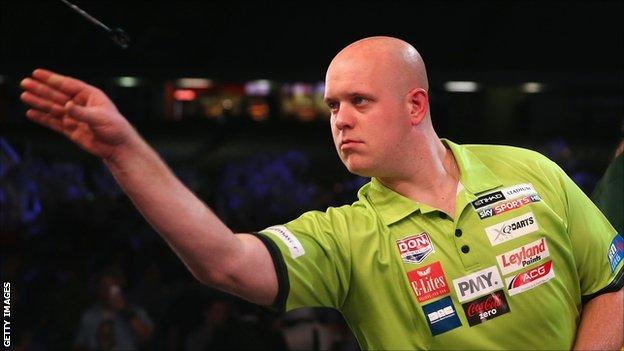 Michael van Gerwen remains top of the Premier League table, despite suffering his first defeat of the competition.

The 25-year-old, who won the Premier League in 2013, lost 7-3 to fellow Dutchman and defending champion Raymond van Barneveld in Aberdeen.

Dave Chisnall could have overtaken Van Gerwen at the top but lost 7-3 to Phil Taylor in week 11.

Taylor took three points from his two matches on Thursday and is still in contention for a play-off spot.

After beating Chisnall, the 16-times world champion let a 5-2 lead slip to draw 6-6 with Stephen Bunting, who had earlier lost to 7-2 to a resurgent Adrian Lewis.

Ten players began the Premier League tournament in February and, of the eight remaining, only four can qualify for the play-offs in London on 21 May.