When Scott Mitchell won the BDO World Championship in January 2015, he knew his life would never be the same again.

"Then you put me into Lakeside with 2,000 people screaming my name. I'm not sure who they are but they seem to know who I am. It's the most topsy-turvy world I'm living in at the moment."

It has been quite a journey, and quite a year, for 'Scotty Dog'.

As he prepares to defend his world title, he speaks to BBC Sport about his memorable victory at Lakeside, being recognised by strangers and making an appearance on one of his favourite television programmes.

'I savoured every minute'

Mitchell had never progressed past the last 16 in five previous World Championship appearances but showed excellent form to reach the final, where he beat Martin Adams 7-6 to win the world title for the first time.

"Martin is 'Mr BDO' and has been for the last 10 years. People kept asking who I wanted to play in the final and, it really was no disrespect to Glen Durrant [BDO world number one], I really wanted to play Martin.

"He'd done me in 24 minutes about three years before. I'd travelled for 12 months to make it to the World Championship and then he beat me 3-0 in the first round in 24 minutes. That was my motivation for the final.

"The week after I won was absolutely crazy. I'd read [Former BDO world champion] Andy Fordham's book and I remember him saying that he'd drunk so much, he doesn't remember anything about the game when he won in 2004.

"Andy's a big hero of mine and I remember reading that, so I didn't drink too much before I played the final. I drank coffee at the Champions' Ball after I'd won. I think I had one glass of champagne, and I savoured every minute of the whole evening.

"By about seven o'clock the next morning, the phone was ringing off the hook for the whole day."

"Unfortunately, I got to my local league game the following night and I'd been dropped.

"I was world champion one day and I'd been dropped the next because I'd missed the Monday before - and quite rightly so."

The perks of being world champion

About 4m people watched Mitchell's victory over Adams on BBC Two. Now, perhaps understandably, it is quite difficult for him to keep a low profile around his home village of Bransgore.

"The biggest change is being recognised. It's not a perk, but it's nice to know that when you go to the supermarket, there's a little kid saying 'that's the world champion'.

"His mum's saying 'don't be stupid', and I have to tap the lad on the shoulder and say thanks for recognising me. There have been lots of fun moments like that.

"I've been to scout groups, taking a dartboard up for kids who have never thrown a dart before, and having pictures with the trophy. It really has been an amazing year.

"On the exhibition circuit, I was looking in July and my wife said I was booked up for the three months before Christmas. After Lakeside I'm booked up until Easter with varying commitments.

"I don't want it to end - it feels like the game that keeps on giving at the moment."

During his run to the Lakeside final, Mitchell said he would utilise any prize money to buy a new tractor for the family farm. His father, Jeff, took delivery of the new vehicle soon after Scott's World Championship win, which earned him £100,000.

"We went off and got a nice little tractor. The unfortunate thing is I think I need to take my dad for some new glasses now.

"We had little old vintage tractors and if you hit the barn pillar or something, it just stalled the tractor. But this one's a bit bigger so it just takes it straight out.

"I need him to be able to see the end of the bonnet. Apart from that, it's all been good for him."

The tractor story and Mitchell's farming background earned him a spot on one of BBC One's flagship programmes in March, as he appeared in a feature on Countryfile.

"It's huge! Let's not beat around the bush here - 4m people saw me hit that winning double at Lakeside, and 9.5m people saw me throw a set of keys to a tractor to my father. Countryfile's great, isn't it?"

The rough patch, and rebuilding for Lakeside 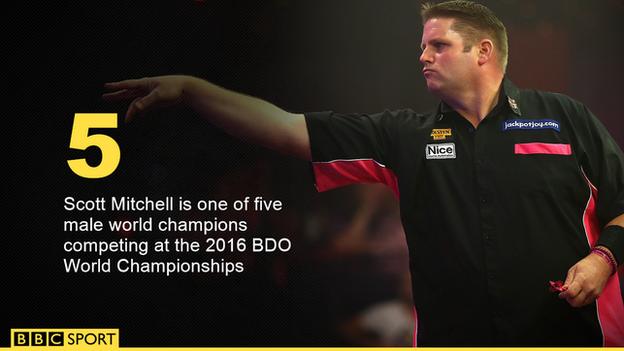 Being world champion brings pressure and extra scrutiny. Mitchell struggled for form at times during 2015, but won the England Masters and Jersey Open titles and led England to World Cup victory in October.

"For the first three months after Lakeside, I was in the bubble. I felt nobody could touch me.

"Then I had a little thing in my head that maybe I can't do it and maybe the bubble's burst. I had three or four months with a lot of soul searching and struggling, but it got to September, the work at home had quietened down a little bit and more practice came in.

"That culminated in me winning the England Masters in September and winning the World Cup with England as captain.

"That was the most amazing feeling - picking up a World Cup as England captain. It doesn't happen often, particularly in football. Winning breeds winning, so those two or three things have come together and I've ended the year on the back of knowing that I can play well."