The 38-year-old regained the title he first won in 2013 and is the eighth player to win the crown more than once.

Waites, a carpenter from Huddersfield, raced into a 5-0 lead.

Smith, 40, took the sixth set with a 161 checkout to spark hopes of a fightback, but Waites eased to a comfortable victory.

Waites won his first title in 2013 with a 7-1 win over Tony O'Shea inside 74 minutes - and this match seemed destined for a similar outcome from an early stage.

Smith, playing in his first Lakeside final, seemed to be punished for every poor visit he made to the oche, with Waites opening up a 3-0 lead at the first interval.

The fourth set went to a deciding leg and Smith looked well placed to win it, but Waites hit scores of 174 and 180 to set up a routine checkout, which he landed with ease.

A fifth set followed for ninth seed Waites, again on a deciding leg, before Smith prevented what would have been a sixth whitewash in a BDO World Championship final with a 161 checkout to win the sixth.

But he missed four darts at double to take the seventh set.

Waites then stepped in with a 14-dart leg to restore his five-set lead, ending any danger of an unlikely comeback.

One of his final acts was to land a 156 checkout while his opponent was waiting on 49 to win the eighth set.

Is Waites a worthy champion?

Absolutely. Many wondered if Waites, dogged by a shoulder injury during the past couple of years, would ever rediscover the form that saw him to a first world title in 2013.

His two visits to Lakeside following that initial success were ones to forget.

He returned as defending champion in 2014, only to be dumped out 3-0 in the first round by Alan Norris.

Then ran into an inspired Ross Montgomery in round two 12 months later.

Not many were talking up Waites heading into the 2016 event, but a first-round demolition of Willem Mandigers was a warning to the rest of the field that he was back to somewhere near his best.

The comebacks he produced to beat Geert de Vos in the second round and then top seed Glen Durrant in the quarter-finals were unforgettable.

When a player fights back from seemingly hopeless positions to win, a feeling begins to develop that the player's name is already on the trophy.

And so it proved to be.

At the age of 38 and finally playing pain-free after shoulder surgery, this could be the second of many more Lakeside victories for Waites - a crowd favourite with undoubted quality. 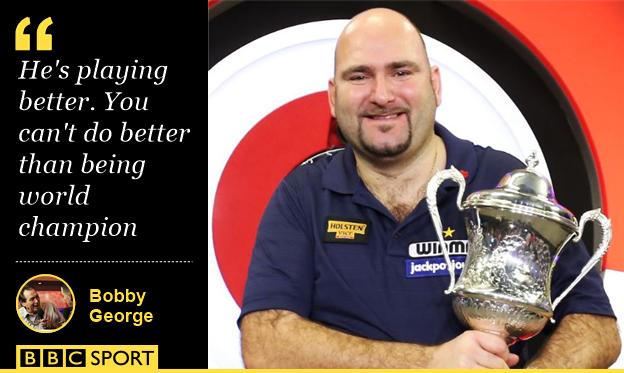 2016 BDO world champion Scott Waites: "It seemed a million miles away when I had shoulder surgery. I had six weeks without throwing a dart. That's painful in itself. Now I'm taking the world title back home.

"I'm speechless at the minute. I put my heart and soul into trying to win this. Today, I took my chances before Jeff took his. That was the difference."

Runner-up Jeff Smith: "I found myself trying to make something out of nothing. We must congratulate the champion, Scott was incredible - he dug in and made it to the end.

"I've just tried to adapt to each match. Last year I had a tough run in the semi-finals, and now I've had a tough final this year. But I guarantee I'll be back next year."

Former World Championship finalist Bobby George: "Jeff Smith has played some entertaining darts in the tournament. Even if the final was disappointing, Scott Waites wouldn't have cared.

"When you don't have a lot of chances at a double, you've got to take them. When you try too hard, like Jeff, it doesn't happen."

Key stats from the final

• Waites is the eighth player to win the BDO title more than once. The others are John Lowe, Eric Bristow, Jocky Wilson, Phil Taylor, Raymond van Barneveld, Ted Hankey and Martin Adams.

• Smith's 161 finish to win the sixth set equalled the highest checkout of the tournament.