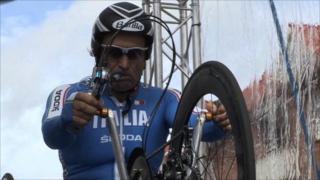 Former Formula One driver Alex Zanardi tells BBC Sport why he has decided to compete in for a place in Italy's 2012 Paralympic handbiking team.

The 44-year-old Italian, who won two CART titles in North America, lost both legs in an accident in 2001 but two years later was driving competitively again after designing his own prosthetic legs.