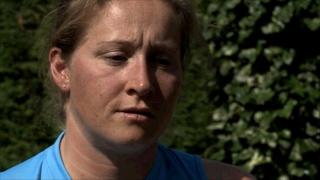 Paracyclist 'worried' for shoulder after crash

British paracyclist Rachel Morris has already lost both of her legs to a condition which causes her body to reject injured limbs.

So when she dislocated her shoulder in a training accident last month, she admits she became "very, very worried" about losing her arm, too.

BBC Sport followed Morris to paracycling's Road World Championships in Denmark, to see if she could defend either of her world titles despite her injury and her fears.

See more on British Olympic Dreams, BBC One at 1430 BST on Saturday 17 September, 1530/2230 BST on BBC News Channel, and on iPlayer for seven days after broadcast.