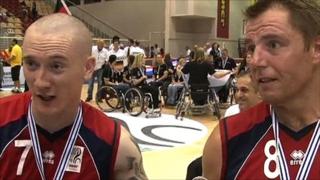 Terry Bywater says the Great British men's wheelchair basketball team will go into London 2012 full of confidence after defeating Germany 76-65 to win the European title in Israel on Saturday.

Bywater, who scored 30 points to help Britain clinch their first European title since 1995, says his "awesome" side won because they were not "scared or nervous" of their opponents.

Simon Munn adds that he is "over the moon" to secure a gold medal having also scored 30 points.

Sri Lanka fight back with bat after Root's 228 - radio & text