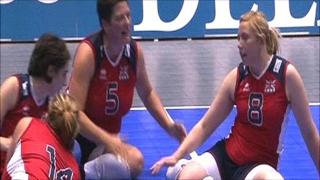 Great Britain's sitting volleyball teams competed at the European Championships in Rotterdam last week, in preparation for next year's Paralympics in London.

While the men's team have already earned their place at the Games, the women's team have struggled for results and now have until the end of the year to convince Paralympics GB that they deserve a place at 2012.