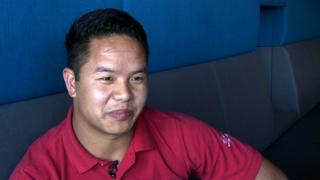 GB Sitting Volleyball rising star Netra Rana tells how he got into the sport whilst recovering from injuries sustained serving as a Gurkha with the British Army in Afghanistan and of his ambitions for the London 2012 Paralympics.

Recently the British Paralympic Association (BPA) announced that a Men's Sitting Volleyball team will take part at the London 2012 Paralympics and the BPA are trying to confirm a British passport so Rana can compete.