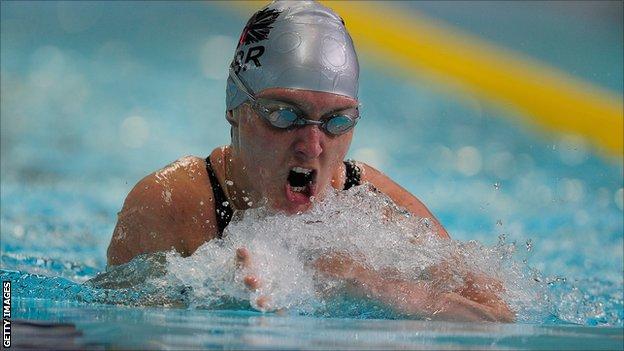 To be a success in any sport at any level you need hard work and determination, but you also need luck to be on your side.

Her swimming cap fell off at the mid-way point of the final of the SM6 200m individual medley, the event in which she was the defending Paralympic champion.

She regained her composure to finish third in the race, and added another bronze medal in the S6 50m freestyle later that week.

But the 27-year-old, who was born in Essex but is now based in Chorley and trains in Manchester, was far from pleased with that.

"They were a great games, but not as great as Athens," she told BBC Radio Manchester. "I was going into Beijing as world and Paralympic champion and the world record holder.

"I wanted to go to Beijing and be Paralympic champion. I always put so much pressure on myself to perform, and if I don't, I get really upset.

"I felt I'd let my family and everybody close to me down. It was horrible. I came away and genuinely didn't know if I wanted to continue.

"But I had to continue because it's in London and you have to do it."

Another inspiration for Jones is her rivalry with fellow Brit Ellie Simmonds who, as a 13-year-old, won two gold medals in Beijing and at London's Aquatics Centre at the Paralympic trials in March.

"As long as I'm on that podium, I'll be more than happy because the past four years have been very difficult for me," said Jones.

"I've been beaten by Ellie ever since and that's very difficult for me.

"I've had a big 36-week block of training since September and mentally I was exhausted. I couldn't see the end of the road.

"But I've had 10 days off, I'm going to go into the next few months of work and do what I've got to do. Hopefully I will come out as a medallist."