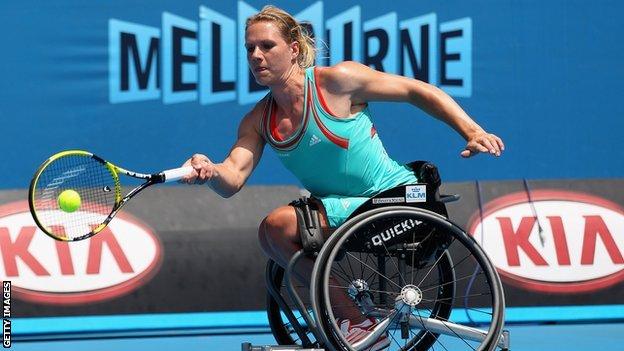 Vergeer, who has won her last 452 singles matches, heads the field at the Eton Manor International, which begins on Thursday.

The venue will also host Paralympic tennis at Games time.

Tennis is one of four Paralympic test events over the next week, along with archery, boccia and athletics.

Eton Manor, based at the Olympic Park, is the only venue built specifically for the Paralympics

British number one quad player Peter Norfolk, the world number two, will also hope for a winning start as he continues his preparations for London, where he is aiming for a third singles title. His biggest challenge this week is likely to come from doubles partner Andrew Lapthorne, who is ranked fourth in the world.

The archery event runs from Friday to Sunday at the Royal Artillery Barracks, with 12 GB archers among a 56-strong field from 21 countries competing in all seven Paralympic disciplines across recurve and compound.

Among those competing for GB will be Beijing gold medallists Danielle Brown and John Stubbs.

"This is going to be great experience for all our archers taking part, and with the selection process on-going, I'm sure those not involved - but there to support those who are - will be fired up to be involved when the real thing gets under way later in the year," said Archery GB Paralympic team manager Paul Atkins.

"It's a really busy month for our squad after the first selection shoot last weekend, this weekend's tournament and then the second and final selection shoot to come in a couple of weeks.

"But everyone's really excited about being involved this weekend, whether taking part or otherwise, it's going to be a great weekend, an interesting one, and I'm sure the 12 GB archers involved will be highly competitive."

A total of 10 countries will take part in the London Boccia Invitational, which runs from Saturday to Monday at the Basketball Arena - with the Beijing gold medal-winning team of Nigel Murray, David Smith and Daniel Bentley hoping for more success as they prepare for the Games.

Murray and Smith will also be competing in the individual BC2 and BC1 categories while Zoe Robinson, Jessica Hunter, Jacob Thomas and Scott McCowan, who have also been selected for the 2012 Games, will also be in action.

Meanwhile, London Marathon winners Dave Weir and Shelly Woods will be among the GB track and field athletes trying out the Olympic Stadium in Tuesday's London Disability Athletics Challenge.