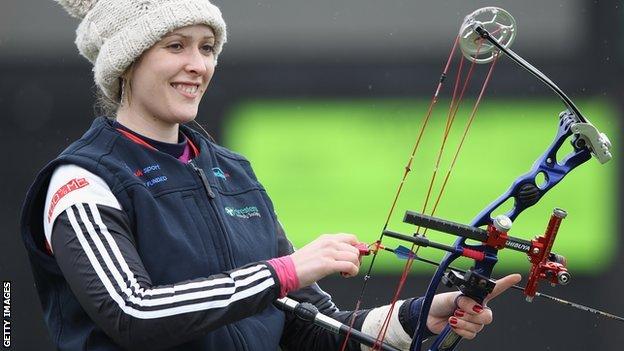 Paralympic archery champions Dani Brown and John Stubbs have vowed to bounce back in the London Games after missing out on golds at the test event at the Royal Artillery Barracks.

"Although it's disappointing when you don't win, it's probably the best thing that could happen to me," Brown told BBC Sport.

"I am going to go home and train so hard so it doesn't happen again."

The event saw 56 of the world's top Paralympic archers competing in seven categories at the venue, which will also host the sport during the Games themselves.

As well as the silvers for Brown and Stubbs, there was also a bronze for Britain's John Cavanagh in the compound W1 event.

The 13-strong GB team for London will be finalised later this month with the second selection shoot on 19 and 20 May at Lilleshall and both Brown and Stubbs, who led their categories after the first shoot was curtailed by bad weather, are keen to have the chance to defend their Paralympic titles.

"Although this event is important, it has been a big distraction because we still have the selection shoot ahead of us and we all want to do well at that to ensure we get to the Games themselves," said Stubbs.

"This test event has been good for us and it has helped us to see the venue and the facilities and it was important for us to be part of it. It is a work in progress but we are pleased.

"My final here could have been a bit better but I've learned from it and hopefully that experience will help me in the future and I can kick on. I was ranked first at the first selection shoot and I want to win my place on the team and be here at the Games."

Brown, who won team gold at the 2010 Commonwealth Games in Delhi, had the added pressure of playing a key role in the Olympic Stadium opening ceremony on Saturday where she showed her archery skills in front of the 40,000-strong crowd and admitted it may have had an impact on her preparations for the test event.

"Having the chance to do that was an amazing opportunity. I honestly don't think it helped with the competition but I'm glad I did it," she said.

"However, there is no point in peaking at this event if you don't get to the Games themselves so in effect the selection events are the most important.

"I beat Stepanida at the Worlds last year but her shooting was down on what she did there and mine was a long way down.

"Sometimes losing is a better motivator than winning and I will make sure my arrows are all in the middle next time."