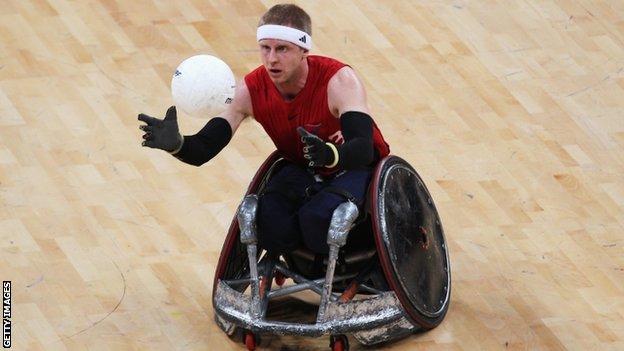 The British Paralympic Association has named six Games debutants, including one woman, in its 11-strong ParalympicsGB wheelchair rugby team.

Five were part of the team that finished fourth in Beijing in 2008.

The six Paralympics debutants include team captain Steve Brown, and Kylie Grimes, only the second woman selected by GB for the mixed-gender competition.

"We are definitely looking for a medal out of this Games," said British wheelchair rugby chief David Pond.

"The team has finished agonisingly close at the last two Games, despite securing strong results including three successive European golds in 2003, 2005 and 2007."

The sport, originally known as "murderball" because of its aggressive, full-contact nature, is played on an indoor court and involves teams of up 12, with four players per side on court at any one time.

Since making its Paralympic debut in Sydney in 2000 the game has gone from strength to strength, and tickets for the sport at London 2012 sold out in record time, which the Great Britain team hope will play to their advantage.