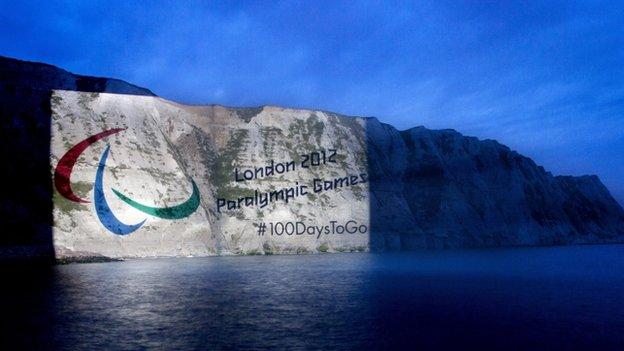 Organisers have confirmed that the 2012 Paralympics will be the biggest ever.

With 100 days to go, the International Paralympic Committee says athletes from 165 countries will compete - 19 more than in Beijing four years ago.

The number of competitors will also increase, to around 4,200.

"It is pleasing that Great Britain, the spiritual birthplace of the Paralympic Movement, will get to host the biggest ever Paralympics," said IPC president Sir Philip Craven.

The opening ceremony for the Games will take place on Wednesday, 29 August with Coldplay confirmed as the star act for the closing ceremony on Sunday, 9 September.

More than one million tickets for the Games go back on sale at 11:00 BST on Monday. The London Organising Committee of the Olympic and Paralympic Games (Locog) sold the same number during last year's opening phase of sales.

"It is a massive move for the Paralympic Movement that so many tickets have been sold so far out," 11-time Paralympic gold medallist Baroness Tanni Grey-Thompson told BBC Sport.

"I think it has fed off the excitement of the Olympics where a massive number of people applied for tickets, but there is also a genuine passion for Paralympic sport.

"We want the stadiums full with lots of British people supporting the home athletes. I don't mind why people come and watch the Paralympics. Sometimes it might be because they didn't get Olympic tickets but they got Paralympic ones, or they might be genuine sports fans, or they want to come and have a nose around the Stadium and the Park at Games time.

"The most important thing is that people are sitting in their seats cheering on performances and they will see some amazing performances.

"In Barcelona in 1992 the stadiums were full but most of those tickets were sold on the day. People had enjoyed the Olympics and then because the tickets were quite cheap they came and watched the Paralympics.

"Once the Olympics start I think people again will start thinking about getting Paralympics tickets but those who have bought early have been really sensible because I think it will get more difficult to get tickets the nearer you get to the Games."

Among the events going back on sale on Monday will be both the opening and closing ceremonies, athletics at the Olympic Stadium and track cycling in the Velodrome, which sold out in last year's opening phase of sales.

Locog chairman Lord Coe said: "The athletes involved in the Paralympic Games are incredible sportsmen and women and I urge everyone to take this chance and to form memories that will last a lifetime."

Craven added: "The Games won't just be the biggest ever in terms of athletes and countries either. I also believe the levels of athletic performance will reach new levels and a record number of TV viewers around the world [will] tune in.

"The recent Paralympic test events gave us all a flavour of what we can expect later this summer, and between now and 29 August the excitement levels will continue to rise to astronomical levels."

The 100-day mark comes as some of the world's leading Paralympic athletes prepare to take part in the Paralympic World Cup, which begins in Manchester on Tuesday.

The multi-sport event, which features athletics, men's and women's wheelchair basketball and seven-a-side cerebral palsy football will be a key part of preparations ahead of London.