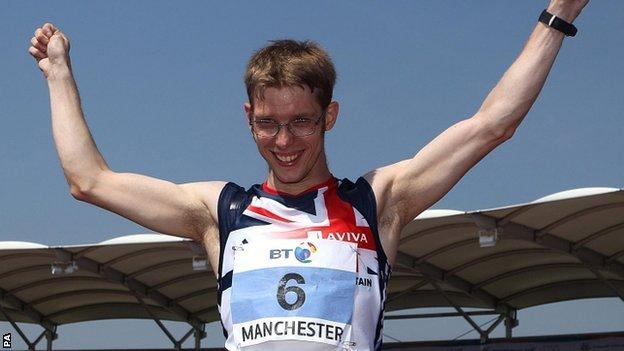 Britain's Graeme Ballard continued his superb early-season form with a 100m world record at the Paralympic World Cup in Manchester.

"It's absolutely great. I just want to keep it going to London," he said.

South African double amputee Oscar Pistorius also gave the crowd something to cheer with a comfortable victory in his 200m race.

"I've been really looking forward to this event," said Pistorius, who is hoping to compete at both the Olympics and Paralympics this summer.

"It was a great day with a big crowd and fantastic weather and the vibe was unbelievable," he told BBC Sport.

"I felt like I was comfortable with my rhythm out of the blocks. I wasn't as explosive as I might have been but I was consistent. I knew when I came out of the corner it felt good but there was a headwind in the final straight.

"All in all I'm happy with the run. It wasn't the quickest but it felt comfortable and that is often a good indication."

Ballard won 200m bronze on his Paralympic debut in Athens in 2004 but missed out on medals in Beijing and also at last year's IPC World Championships in New Zealand and is currently not on UK Athletics funding.

Nonetheless, the Chorley athlete has enjoyed a good winter, lowering his 60m and 200m personal bests, and winning over both 100m and 200m at the test event at the Olympic Stadium earlier this month, beating Beijing 100m silver medallist Ben Rushgrove. He repeated the victories over his compatriot in Manchester.

Next stop for Ballard will be next weekend's Knowsley Disability Athletics Grand Prix before the European Championships in Holland in June.

"You're never past it until you want to be past it and hopefully if conditions are good I can get some good times in Holland," he added.

Ballard's coach Steve Thomas said his charge's improved execution was in part down to his greater understanding of the different phases of the race.

"Graeme's start has always been good, but he's never been so good at the finish," he explained.

"He's always thought that the only way to run is just to try to get faster and faster through the race but we've focused more on the middle and end phases and how he can maintain his form better through to the finish, and at last it seems to be clicking."

Wheelchair racer Hannah Cockcroft won gold in her T34 category after a successful weekend's racing in Switzerland where she lowered three world records, having also recently become the first athlete to break a world record at the Olympics Stadium.

"Today's goal was to win gold and I've done that," she said. "Switzerland is known for its fast tracks so I wasn't expecting anything today. I know some things didn't go as I would have wanted them to but I want to get the mistakes out before the Games."

There was disappointment for Britain's Dan Greaves in the discus with the world champion beaten by the Paralympic champion Jeremy Campbell, whose throw of 62.18m saw him take gold and also break Greaves's world record of 59.85m set last year.