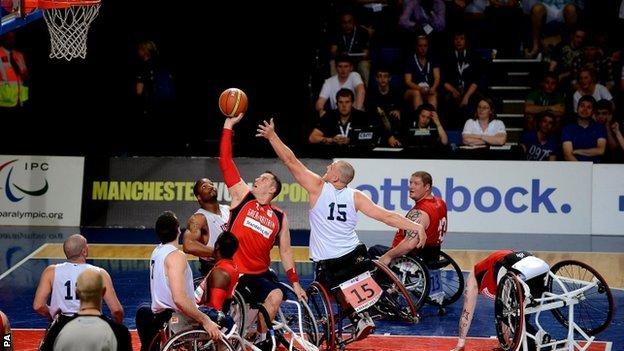 Wheelchair basketball player Simon Munn will take part in his sixth Paralympic Games after being named in the Great Britain squad for London.

Britain's men are ranked second in the world and won Paralympic bronze in Athens and Beijing.

"It is definitely a special achievement for me to be able to compete in my sixth Games," said Munn.

It's really tough when you have 15 girls who all deserve to go, but we can only take 12 and we feel we've got the right 12

"Especially with the competition and depth in the current squad. Hopefully with the support of the British public we can be a real force to be reckoned with in London."

BBC Sport columnist Terry Bywater added: "It absolutely means the world to me to be selected for a fourth Games. To have it taking place in my home country is probably something I will only have the chance to do once in my career.

"To represent your home country at the highest level is always a massive honour and when I started playing all those years ago I never thought I would make it to four Paralympic Games.

"It is a huge relief for me to have been selected, especially with the injury problems I've had with my wrist over the last few months, and I'm proud and delighted that my hard work has paid off.

"We now have a lot of experience in the team and quite a few of us have played together and won big games, like last year's European Championship final and the Beijing Paralympic bronze medal play-off. I think the fact that we know what those big games are all about will be an advantage when it comes to the Games themselves.

"I played at last week's Paralympic World Cup, which was my first big tournament since the injury, and although I didn't play a lot of minutes our coach Murray has taken care of me and it was a good way to return and the wrist held up well.

"Playing at the tournament was great preparation for us as a team and to have recovered from a heavy loss to the USA in the pool games and lose out to them by just five points in the final shows we are capable of competing against the big sides - but we still have work to do ahead of the Games."

Britain's women finished eighth in Beijing and the current squad lost all four of their games in Manchester last week as they took on three of the best four teams in the world.

They are led by Clare Strange, heading for her fourth Paralympics, and emerging star Helen Freeman.

"It was a really tough decision and we left it right until the last game at the BT Paralympic World Cup on Saturday to make the final choice," said coach Garry Peel.