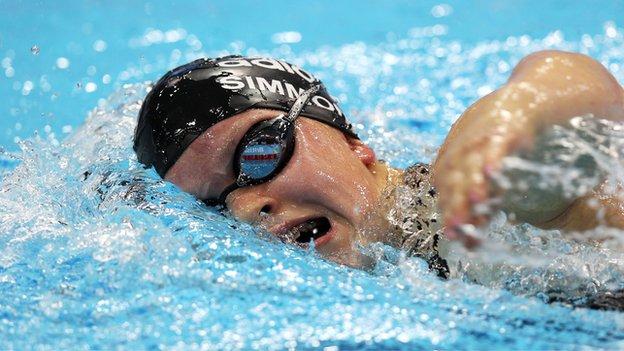 The 16-year-old from New Hampshire beat the Briton's S6 category 400m world best on the opening day of action in North Dakota.

She then followed it up by smashing Simmonds' 100m freestyle time of one minute 15.97 seconds.

Her 400m time of 5:24.46 on Friday beat Simmonds' previous standard of 5:25.20, which the two-time Paralympic champion set at last summer's European Championships in Berlin.

Simmonds is the current world and Paralympic champion over 100 and 400m, but was beaten to gold by Dutchwoman Mirjam De Koning-Peper in the 100m final in Berlin.

Arlen, from New Hampshire, is a former New England-ranked champion swimmer who was left paralysed in 2006 by a virus which affected her spinal cord and also left her in a vegetative state for two years.

She only returned to the pool last year and has now secured a place on the 34-strong US team for London.

US swimmers set 12 world records at the trials, with seven-time Paralympic gold medallist Jessica Long claiming six of them.

The 20-year-old, who was adopted from a Russian orphanage when she was 13 months old and had her legs amputated five months later, set new marks in the 200 individual medley (twice), 100m butterfly, 400m freestyle and the 50 and 100m breaststroke.