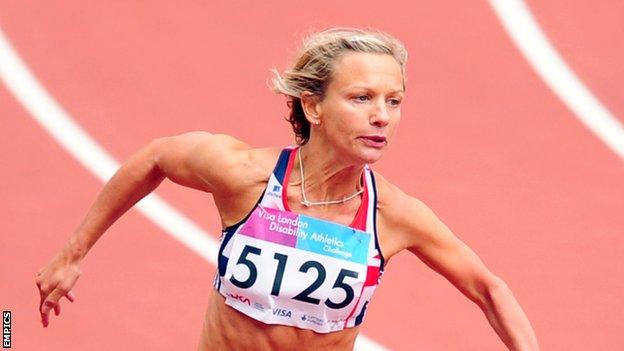 Surrey sprinter Sophia Warner says she is focusing on competition after having her place in the ParalympicsGB team for London 2012 confirmed.

She told BBC Sport: "I've been on the team on and off since about 1997 and my event has never been at a Paralympic Games so this is absolutely momentous.

"The most important thing now is not to get injured or over-do it. I need to make sure I stay fit and healthy."

Warner is confident of achieving success at the Games after taking 100m silver and 200m bronze at the European Championships in the Netherlands earlier this year.

She added: "I got beaten by a couple of people but I shouldn't panic.

"I've done the work but I want to see if I can gain a bit more strength.

"After that I need to get out there, race as hard as I can and enjoy myself."

Warner, who won bronze at the World Championships last year and trains in Sussex, is targeting a place in the final of both individual events.

However, she says she will not be too disheartened if she does not take away a medal.

"There is a lot of competition," she continued.

"I have to have enthusiasm that Paralympic sport continues to grow. The first time I ran, I ran 26.6 seconds for 100m and I've taken 10 seconds off [that time].

"I've achieved enormous things. If I can't win a gold medal, I have to recognise the fact the sport is growing.

"But hopefully I can get out there and prove my worth."