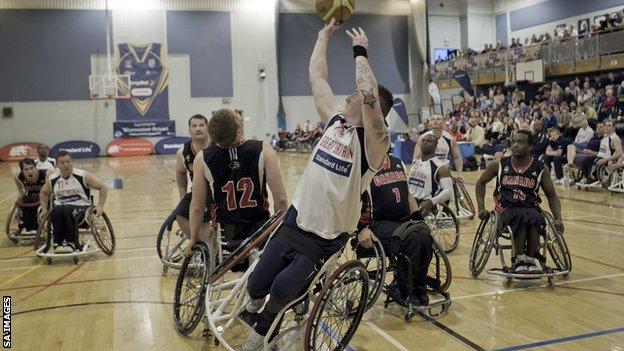 The Olympics are over and what a warm-up it was to the Paralympics!

I've watched lots of Olympic coverage - more than I have done in previous years - and there were so many highlights.

Whether it was a historic win or just a fantastic performance, it has brought tears to my eyes and all of us on the team have been texting each other and getting excited.

I would tell every athlete that if people are coming to watch you and support you, you should give back to them what they give to you

The whole nation has gone crazy about the British team and I've never seen anything like it and I hope that buzz carries on for the Paralympics.

When I watched the athletics and you hear the roar when a British athlete was announced and the noise from the crowd during every event, it really gives you goose bumps and you know they are the extra man helping to get people over the line.

If there is a Paralympian out there who says they haven't been inspired by watching the London Olympics, they are lying. You can't fail to be inspired to do well watching the GB Olympic team wearing the same kit as us and winning so many medals at a home Games - it is a dream come true.

There have been so many spectacular moments - seeing Jessica Ennis with a tear in her eye after all her hard work to win gold in the heptathlon, Chris Hoy battling away on his bike and the way Mo Farah ran in the 5,000 and 10,000m was gobsmacking and made me emotional and I can't wait to get going.

The ticket sales for the Paralympic Games have gone through the roof and personally, I love playing in front of a big crowd. I love showing my sport off to as many people as I can and a big crowd gives me a huge buzz and makes me play better.

The more the merrier for me and when you have people wearing GB kit and waving flags shouting your name and willing you on and wanting you to succeed, you want to reward them for coming to see you.

But the crowd can have a negative effect. Some people might see it as added pressure and others might not be able to focus because of the noise. It can get very overwhelming seeing thousands of people watching you perform on the biggest stage of all when week in and week out you aren't playing under those conditions.

At the end of the day we are only human and you might not perform to your best but I would tell every athlete that if people are coming to watch you and support you, you should give back to them what they give to you.

I think it is going to be absolutely phenomenal!