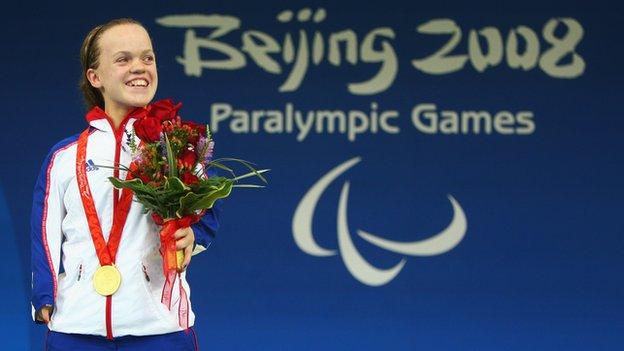 Britain's Paralympic team have been set a minimum medal target by UK Sport of 103 from at least 12 sports at the London Games.

UK Sport has also confirmed that the aim is to maintain second place in the medal table.

In Beijing four years ago, GB finished with 102 medals, including 42 golds from 11 sports, and were second behind China who won 89 golds.

The London Games begin on 29 August and will run until 9 September.

Based on data from all 18 funded Paralympic sports (the five-a-side and seven-a-side football teams are financed by the Football Association), a collective performance target range of 95 to 145 medals has been set with 16 of those sports targeting medals.

GB's Paralympic campaign has been backed by more than £49m of funding from UK Sport.

The British Olympic team had been set a minimum target of 48 medals for London 2012, but surpassed that figure, finishing with 65 medals which included 29 golds.

"British Paralympic sport is better-resourced and in a stronger position than ever before," said UK Sport chair Baroness Sue Campbell.

"We are able to confirm that our goal of holding second place in the Paralympic medal table at our home Games remains on track, in line with our intentions set out back in 2006 when extra funding for Olympic and Paralympic sport was secured.

"The fantastic news we received last week from the Prime Minister that funding for elite sport is to be maintained into the Rio cycle is a wonderful endorsement for the achievements of our Olympic and Paralympic athletes to date.

Medal-winning sports for GB in Beijing

"And it is great to be able to say with confidence, ahead of the Paralympic Games, that the era post-2012 will truly mark a new beginning for Olympic and Paralympic sport in the UK.

"I'd like to wish our Paralympians, their coaches and support staff every success in London and I hope they gain the recognition they deserve for their commitment and dedication to British sport."

British Paralympic Association chief executive Tim Hollingsworth said: "ParalympicsGB is going into these Games better prepared through support from the National Lottery than ever before and we are all ready to give everything to achieve our target of second in the medal table.

"Equally important is the fantastic news that our athletes will be competing in full venues. Winning medals in front of an excited home crowd will give us a great platform to help shift perceptions of Paralympic sport and ensure that our athletes get the recognition they deserve."

232 comments
Back to top
unknown