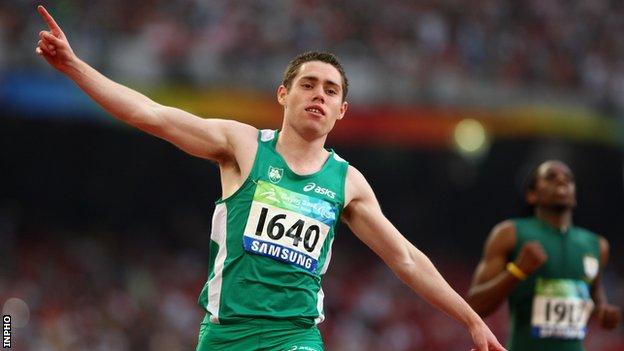 Irish Paralympic star Jason Smyth will battle on to achieve his goal of competing at an Olympics despite missing out on the recent London Games.

County Londonderry man Smyth, 25, is continuing his preparations for the Paralympics in London where he will defend his T13 100m and 200m titles.

However, Smyth is already thinking ahead to the 2016 Olympics in Rio.

"I want to give it another really good shot over the next four years and get what I didn't get this year," he said.

Smyth's 100m personal best of 10.22 set last year was only four one-hundredths of a second (0.04secs) outside the qualifying time for the London Olympics.

The visually-impaired sprinter based himself largely in Florida for the past three years as he chased Olympic qualification before time ran out on his bid last month.

Smyth became the first paralympic athlete ever to compete at a European Championships in Barcelona in 2010 and his progression on the able-bodied circuit continued last year when he was selected for the World Championships in Daegu.

The 25-year-old remains determined to reach his Olympic goal in Rio even though the 100m qualifying mark for the Games in Brazil may be even quicker than the London A standard of 10.18.

"At one stage, I was wondering whether I wanted to keep going but I want to reach my potential and I haven't done that yet," added Smyth whose has less than 10 per cent of normal sight because of the Stargardt's condition.

"Europeans and World Championships are good stepping stones to try and compete at the Olympics and I will be aiming to compete in those events in the run-up to Rio as well my normal paralympic competitions."

Smyth has still to work out his coaching arrangements after the paralympics with his current mentor Stephen Maguire moving to take up a new role with Scottish Athletics in the autumn.

"I don't know yet for sure. I'm looking at probably going back to the States and hopefully getting a new coaching situation sorted out with a view towards aiming for Rio," added Smyth, who is currently in Portugal at a pre-Paralympics Team Ireland training camp.

The big events in 2012 will not conclude for Smyth with the Paralympics as he gets married to his American sweetheart Elise in the US in December.