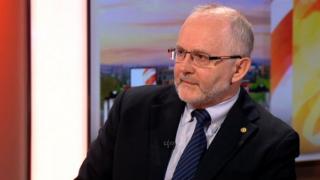 'Biggest and greatest Paralympics ever'

President of the International Paralympic Committee Sir Philip Craven tells BBC Breakfast that the upcoming games will be the "biggest and greatest" ever.

He says that four thousand two hundred athletes will compete and sixty new countries are taking part in London.

Craven adds that a record number of 2.3 million tickets have also been sold.