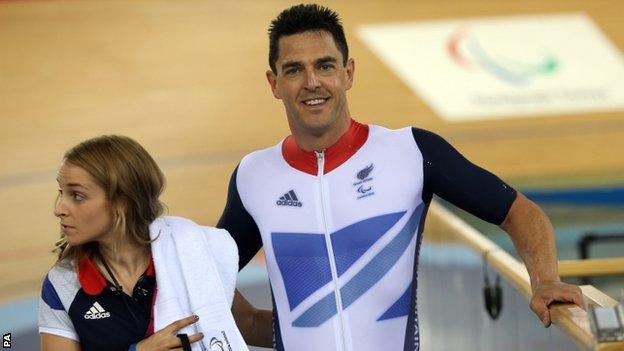 Paracyclist Mark Colbourne won Great Britain's first medal of the 2012 Paralympics with a silver in the C1-3 1km time trial.

Compatriot Darren Kenny, who had won over the distance in both Beijing and Athens, briefly held the lead but lost top spot to a superb run by champion Li Zhang Yu of China.

Colbourne said: "We've worked for the last eight months towards this."

Who is Mark Colbourne?

He added: "I was just completely focused on the black line. We've done this hundreds of times in training and it's about repeating the process.

"I probably only heard the crowd on lap three when I had relaxed into my stride."

Kenny, holder of all the Paralympic and world records in his C3 class, had been tipped to notch the first British victory of the Games.

However he and the rest of the field were left far behind Li's winning time, which would have been a world record for less severely disabled C2 riders, never mind his own C1 classification.

But Colbourne, who only took up the sport after a paragliding accident in May 2009, underlined his promise as the 42-year-old added Paralympic silver to the three time trial silver medals from World Cup events this year.