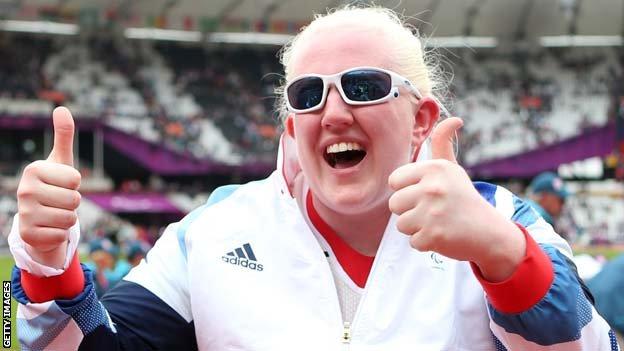 Claire Williams became the fourth Welsh medallist at the 2012 London Paralympics by winning bronze in the F11/12 discus at the Olympic Stadium.

The 24-year-old from Carmarthen, who has visual impairment, had finished fifth in her two previous Paralympic Games appearances.

Josie Pearson missed out on a medal in the F51 club final when she finished fifth.

Earlier on the track, Tracey Hinton qualified for Sunday's semi-finals in the T11 200m. Hinton, the Great Britain women's athletics captain, was the sixth fastest of the eight qualifiers.

Olivia Breen finished fifth in the 100m T38 final on Saturday after qualifying through the morning heats.

The 16-year-old had to wait more than a hour to compete after earlier issues with a restart.

Also on the track, Jordan Howe finished seventh in the T35 100m final.

Howe does not turn 17 until October, but the Cardiff youngster was ranked third in the world in the T35 100m after smashing his personal best last May at the Paralympic test event to record a new mark of 13.04 seconds.

However, in the final, he clocked 13.69 seconds having finished fourth in his heat on Friday in 13.75.

In swimming, Rhiannon Henry also finished seventh in her S13 50M final in 29.41 seconds after finishing third in her heat.

Table Tennis: Paul Davies (class 1) and Sara Head (class 3) lost their semi-finals 3-0, but will play for a bronze medal on Monday. Scott Robertson, Paul Karabardak and Rob Davies are out of the individual competititons.