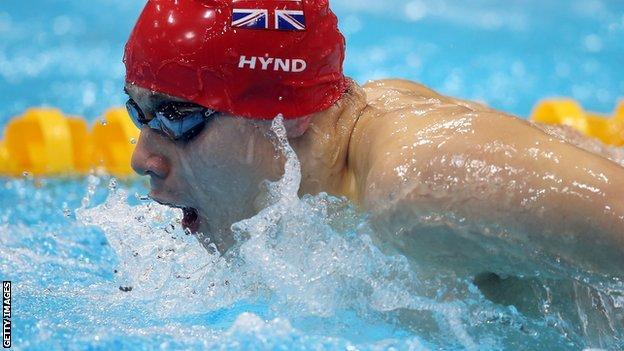 China's Yinan Wang won the race in four minutes 27.11 secs, over half a second ahead of the younger Hynd brother.

"It was a tough race out there, they went out really quick and I just had to hold on in there," admitted Oliver.

Despite failing to retain his Paralympic crown, Sam Hynd, who has club feet and mild muscular dystrophy, was philosophical about the result, but had a word of warning for his brother.

"I am excited to get a medal at the Paralympic Games, it's a great feeling and you can't do better than that," Sam told BBC Sport.

"I am really pleased for him [Oliver] but he better not start bragging!"

For Frederiksen her second place in the S8 400m freestyle, behind USA's world-record-breaking Jessica Long, was a repeat of the result at the Beijing Games.

However, the last four years have been incredibly difficult for the British swimmer, who served a six-month ban after testing positive for "raised levels of Salbutamol" at the 2009 IPC European Championships in Reykjavik.

Four-time Paralympic champion and 5 Live analyst Marc Woods on the return of swimmers with learning difficulties:

"It's fantastic to see the S14 guys back in the pool, two really close, exciting races which is exactly what you want. A whole generation of athletes have missed out because of what went on in Sydney and it's nice to see them back. Aaron Moores was great, at one point I thought he may sneek gold - it wasn't to be but it was great to see GB win a silver medal in the category. Disappointment for Chloe Davies as the fastest qualifier to swim a second slower in the final, but her time in the heat would have won her a silver medal. She is 13 though and will learn from that experience."

She has always maintained her innocence, blaming the result on a mix-up with the inhaler she was prescribed for her asthma, and Frederiksen was visibly emotional as Lord Coe presented her with the silver medal.

S9 100m backstroke swimmer Crisp missed the 2008 Games with a shoulder injury and was pleased to have won a medal in the event he became Paralympic champion in 12 years ago.

"Four years ago I was watching on TV with my arm in a sling and to come back with a silver has put a few demons to rest," said Crisp.

Aaron Moores claimed 100m backstroke silver in the S14 category, for those with learning difficulties.

The classification was only reintroduced for these Games after being axed in 2000, following the discovery that a number of journalists had competed for the Spanish basketball gold medal winning team in Sydney.

Chloe Davies, 13, was the quickest qualifier for the women's event, but missed the chance to became GB's youngest-ever Paralympic champion after finishing fifth.

World champion Millward, was has multiple sclerosis, secured the first Paralympic medal of her career with a second-place finish in the S9 100m backstroke behind Australia's Ellie Cole.