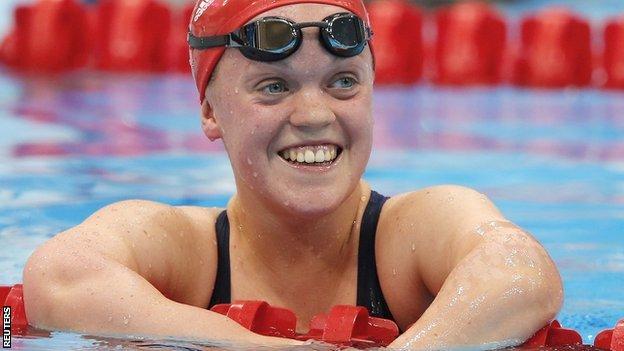 A sport-by-sport round-up of how ParalympicsGB athletes perform on Day Three of the 2012 Paralympic Games in London.

Leigh Walmsley wins her women's individual recurve standing last-32 elimination match 6-0 but loses in the next round 1-7.

Sharon Vennard is into the quarter-finals of the women's individual recurve standing after a 6-2 win.

Libby Clegg, running with guide Mikail Huggins, qualifies from her heat of the women's 100m T12, setting a new world record of 12.17 seconds in the process. The record was then sensationally broken in the next two heats, meaning the world record for the event was broken four times in one morning.

Richard Whitehead wins GOLD in the men's 200m T42, setting a new world record of 24.38 seconds in the process.

Stef Reid and Sophie Kamlish both reach the final of the women's 100m T44 after finishing third and fourth in their heats respectively.

Hollie Arnold finishes fifth in the women's javelin throw F46 with a mark of 36.27m.

Sarah Storey wins her second GOLD of London 2012 in the women's individual C4-5 500m time trial with a time of 36.997 seconds, almost a second quicker than her nearest rival.

Neil Fachie and Barney Storey takes GOLD in the men's individual B 1km time trial with a world record time of 1:01.351. Anthony Kappes and Craig MacLean did not finish the race. They were allowed one restart but officials ruled them out after they failed to finish their opening lap at the second attempt.

Jon-Allan Butterworth wins SILVER in the men's individual C5 pursuit. He set a world record of 4:35.026 in qualifying for the final, the world record was later broken by Australia's Michael Gallagher.

Lee Pearson and his horse Gentleman win SILVER in the grade Ib dressage, pipped to the post by Australian Joann Formosa. The result means Pearson misses out on a tenth consecutive Paralympic gold.

Natasha Baker, riding her horse Cabral, wins GOLD in the dressage grade II event, managing a Paralympic record score of 76.857% in the process.

ParalympicsGB draw their Group A preliminary match 3-3 with Sweden.

Samuel Ingram wins SILVER in the men's -90kg after being beaten 1-0 by Cuban Jorge Hierrezuelo Marcillis who scores a Yuko in the final for victory.

Sam's brother Joe Ingram wins his initial -100kg repechage contest against Canadian Tim Rees by ippon but then loses his quarter-final. He faces another repechage fight to stay in the competition.

Jason Irving finishes eigth in the final of the -60kg division, lifting 163kg.

Natalie Blake was unable to record a score in the women's -52kg division.

Nicholas Beighton and Samantha Scowen win their repechage in the mixed double sculls TAMix2x to qualify for tomorrow's A final with a time of 4:05.91.

John Robertson, Hannah Stodel and Stephen Thomas finish eighth in their second race of the day after finishing second in race one.

Alexandra Rickham and Niki Birrell finish second in their opening race and first in race two in the two-person keelboat (SKUD18) contest.

Helena Lucas also wins her second race after finishing second in her first race of the single-person keelboat (2.4mR) division.

James Bevis grabs BRONZE in the final of the mixed R5-10m air rifle prone-SH2 with Georgina Callingham finishing seventh in the final. Ryan Cockbill manages a score of 598 in the qualifiers but does not make the final.

ParalympicsGB lose their preliminary round Pool A game 0-3 to the Netherlands.

Ellie Simmonds wins GOLD and sets a new world record in the final of the women's 400m freestyle S6. Natalie Jones finishes seventh in the final.

Gemma Almond finishes last in the final of the women's butterfly S10 with a time of 1:13.24.

Claire Cashmore wins her heat in a time of 1:22.90 to qualify for the final of the women's 100m breaststroke SB8.

Anthony Stephens comes second in his heat of the men's 200m freestyle to qualify for the final with a time of 2:51.42.

Rhiannon Henry finishes seventh in the women's 50m freestyle S13 with a time of 29.41.

Sascha Kindred and Thomas Young miss out on medals in the men's 100m breaststroke SB& after finishing fourth and fifth with times of 1:23.53 and 1:23.69 respectively.

Ross Wilson will battle for bronze in the class 8 division after losing his semi-final 2-3. He made it through to the last four after winning his quarter-final clash against Marcin Skrzynecki 3-1.

William Bayley wins his class 7 semi-final 3-1 to guarantee him a medal, he had earlier won his preliminary match 3-0.

ParalympicsGB's women win their Group A preliminary match against Brazil. They were 33-37 down inside the last four minutes but scored the last nine points of the match to win 42-37.

Gordon Reid wins his round of 64 clash against Takuya Miki 6-1 6-2 saying that "playing on Centre Court here was the best moment of my life. It's more than I could have imagined." Meanwhile, Marc McCarroll loses his last-64 clash against Tom Egberink in straight sets 4-6 3-6.

Lucy Shuker wins her round of 32 match 6-2 6-1 against Italian Marianna Lauro while teammate Louise Hunt loses 1-6 1-6 at the same stage.

Jordanne Whiley loses her round of 32 match but by a score of 3-6 4-6. She said: "the crowd were fantastic but I was just overwhelmed and I'm annoyed with myself that I couldn't perform better."