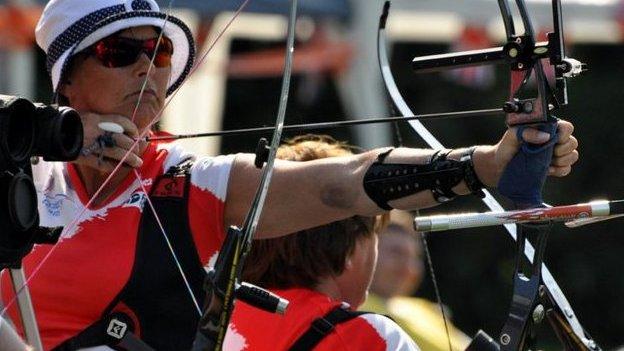 Sharon Vennard was defeated at the quarter-final stage of the women's individual recurve archery event at the Paralympics in London on Sunday.

The Greyabbey woman lost 71-63 to the third seed, Yan Huilian from China.

Vennard had beaten Oyun-Erdene Buyanjargal at the Royal Artillery Barracks on Saturday.

Also on Saturday, Eilish Byrne finished fifth in the Individual Para Dressage and James Brown was ninth in the Men's Individual B 1km Time Trial.

Armagh woman Byrne had returned a score of 73.429% on her chestnut gelding Youri to improve on her seventh position in the first individual event on Thursday.

"I'm just over the moon, I can hardly believe it. I'm delighted," said Byrne afterwards.

Portaferry man Brown clocked a time of 1:07.979 on his way to ninth on Saturday.

The 47-year-old visually impaired cyclist has previously competed in a total of five winter and summer Paralympics across a range of sports.

Byrne is taking part in her second Paralympics, having achieved eighth and 11th place performances in Beijing.

The Armagh woman scored a solid 67.714% on Youri on Thursday, although she felt her performance was slightly below par.

"Youri was a little tense and I struggled to keep him relaxed. Our score was a little lower than usual," said Eilish after that event.

The Dundalk-born rider will also compete in the Freestyle and Team events for Ireland in Paralympic Grade II.